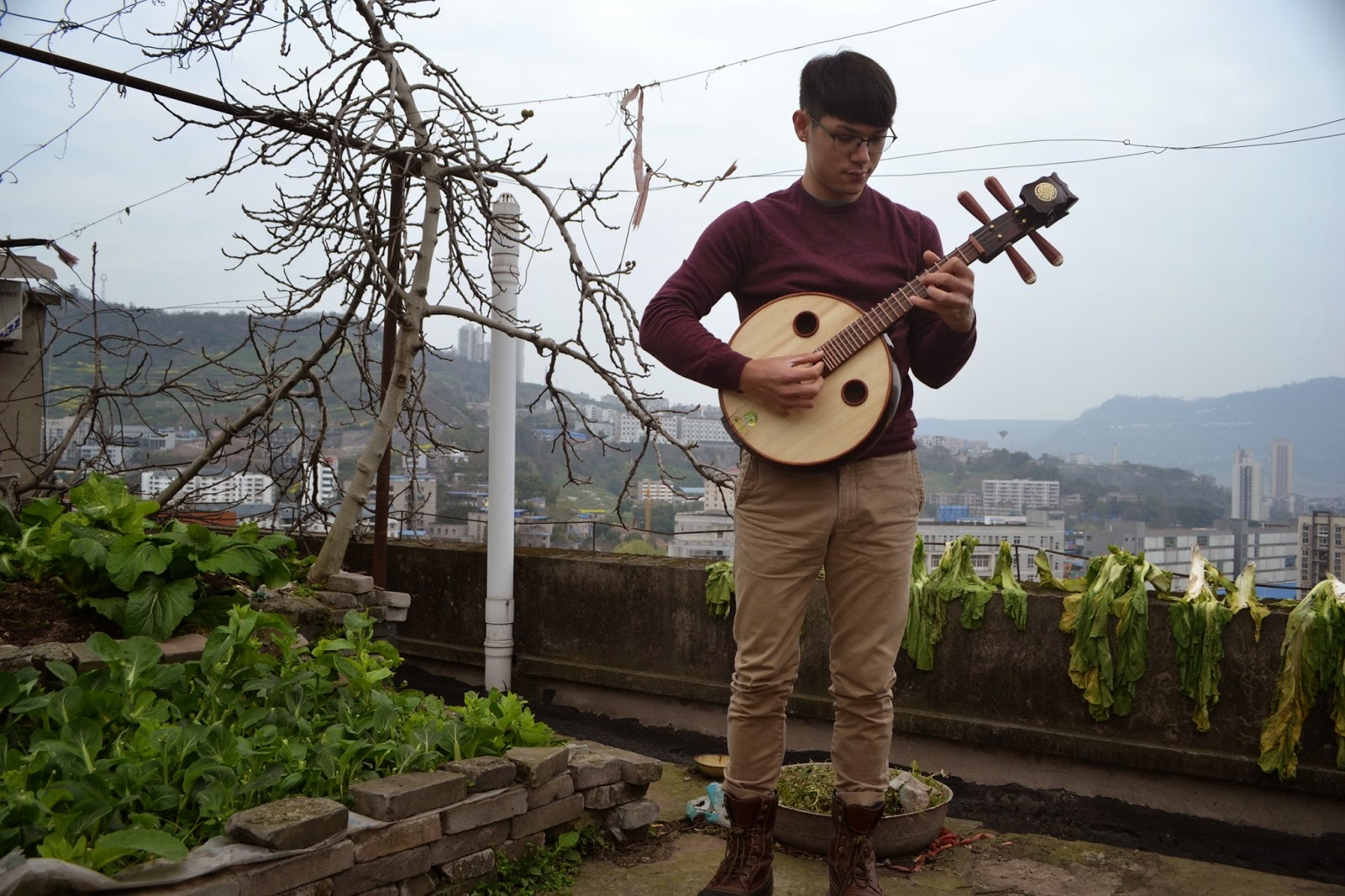 Like most other places on the planet, Spring is a period of change and rebirth in Wanzhou. Except, Spring only lasts about two weeks here. The joke is Chongqing only experiences two seasons: Winter and Summer. This is less of a joke and more of a truth. But these two weeks are absolutely beautiful in Wanzhou. The locals know it, my students know it, I know it, so we all spend as much time as we can outside. This post covers some of the changes I have observed, or some stuff I have done a little differently.

In the picture above I am playing my new Zhong Ruan, or Medium Ruan. It is a traditional Chinese instrument, and commonly employed in Chinese operas and orchestras. It sounds a little like a cross between a guitar and a banjo. The major difference is structural and as a consequence ergonomics: the frets rise about 2cm off the fret board, meaning slides, bar chords, and finger placements must be precise. Traditionally it is played with a large boxy pick called a plectrum (new word for me), but I use the finger picking technique for celerity and dexterity, which levels the general sound to something more round and hollow, like an old electric bass from the 70s.

Since the Ruan is similar to other stringed instruments I have played I have gotten pretty good at it already, especially when in DADA tuning. Old men play old Communist songs on it in the park and I can learn these standards in a few minutes. Funny enough, many of these old Communist songs share similar structure with many metalcore songs. I have lost interest in learning them. Currently I am trying to learn banjo finger picking techniques for Ruan :) 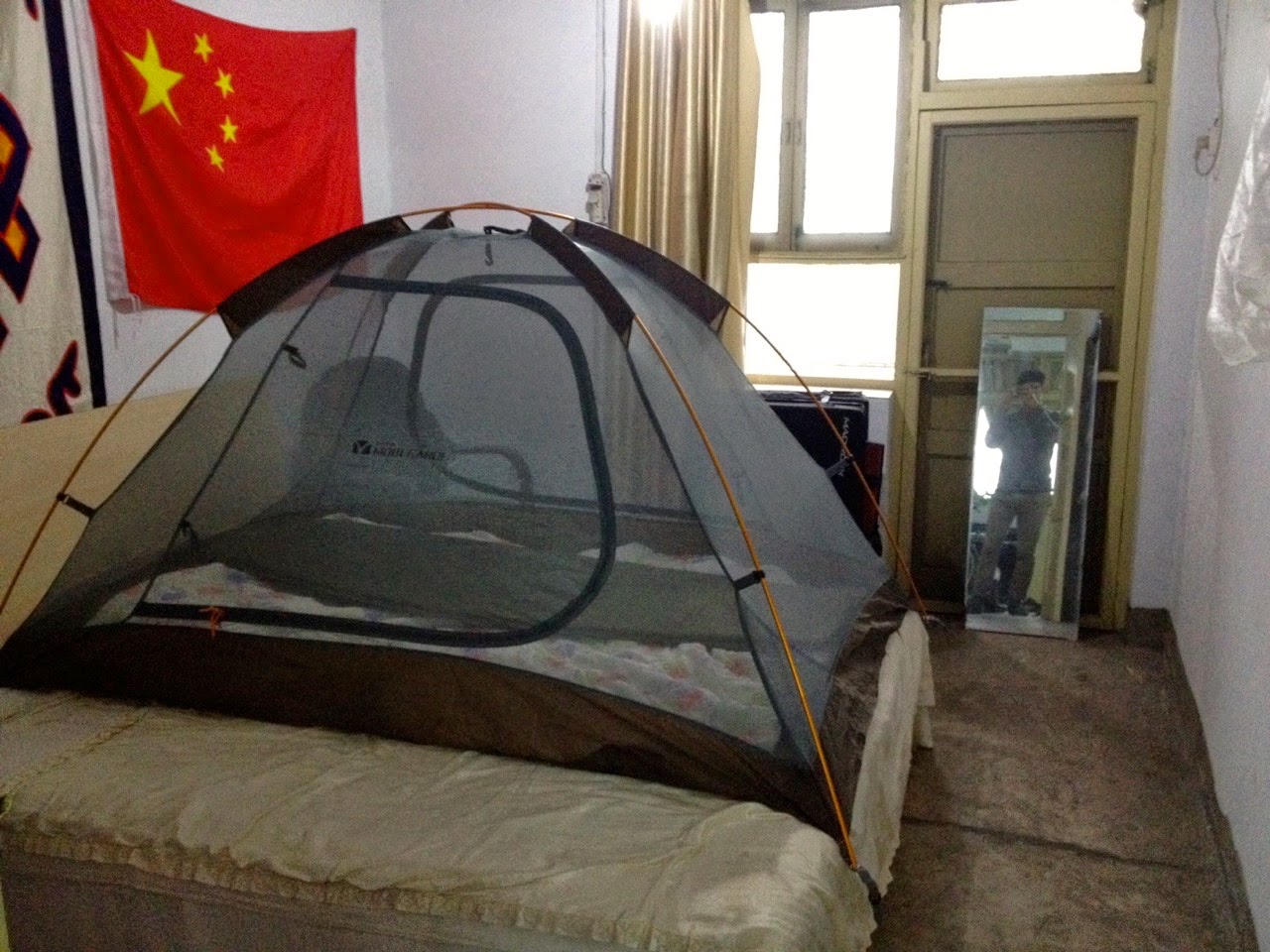 Like last year, with Spring comes mosquitos. Chongqing has a terrible mosquito problem. My apartment fills with mosquitos at night and I am forced to sleep in my tent. As you can see I have my sleeping pad to offset the hardness of my bed. The mosquitos cleared out after two weeks last year. I am hoping for this again. 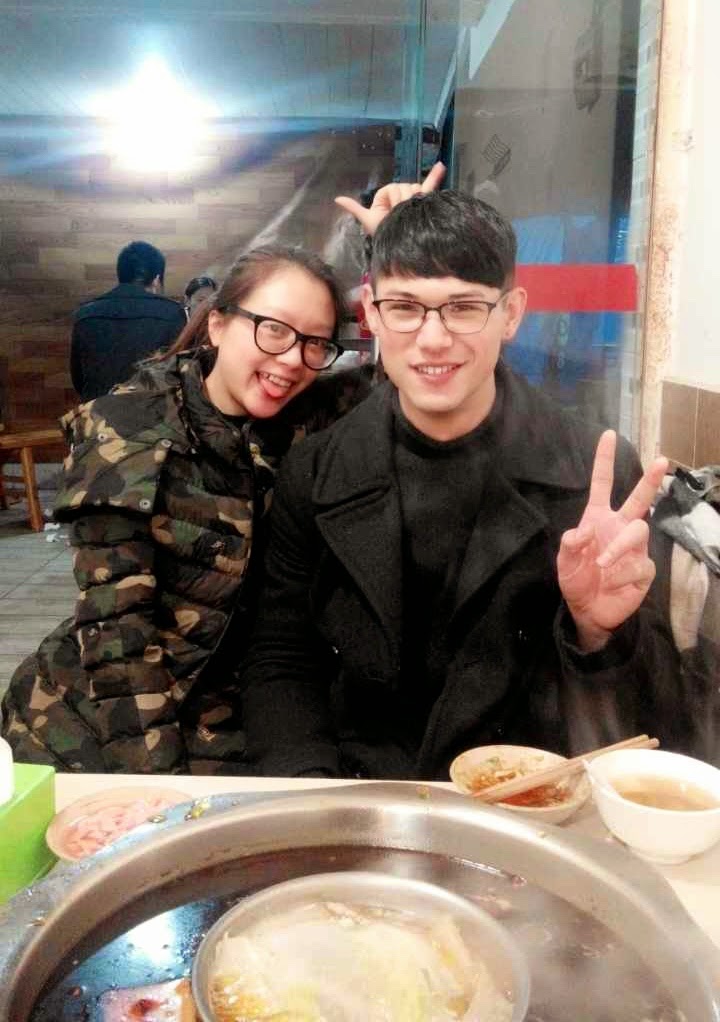 The last of the winter hotpot sessions has begun. Hotpot is the pride of Chongqing. Other provinces have variations of hotpot, but the best spicy pot is in CQ. It is essentially a pot with fire below it. Throw lots of spicy oil inside and then all the ingredients presented before you. Additives range from potatoes to cow tendons to sheep brain. Genghis Khan claimed to have invented it, but ehh. Usually lots of beer is consumed at hotpot, leaving one well full and soused. See, in my opinion, hotpot is nice in the winter, you get to huddle up around a fire with food and beer and your friends, but in the summer it is like sitting in front of a fire in 100F weather.

Above is Kiki. I have been tutoring her for over half a year now. When I first met her, I asked her, confidently, "So, are you in your second to last or last year of high school?" I got a fluster of giggles in response. As it turns out she is over a decade older than me. She is studying English to help her daughter with exams. 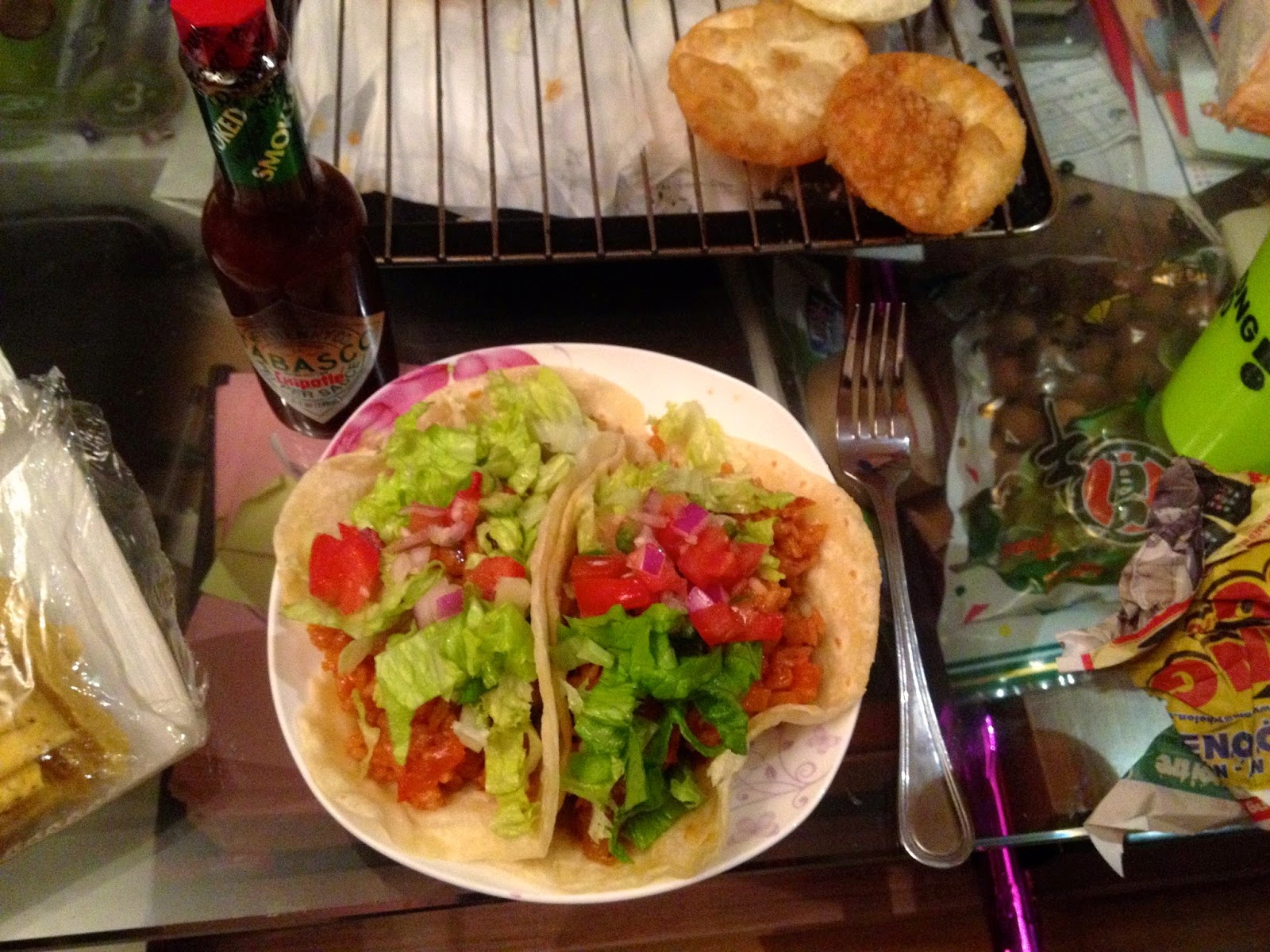 We had a taco night. Everything was freshly made. As I always say, I am extremely fortunate to be in a city with such great friends who happen to be amazing cooks as well. 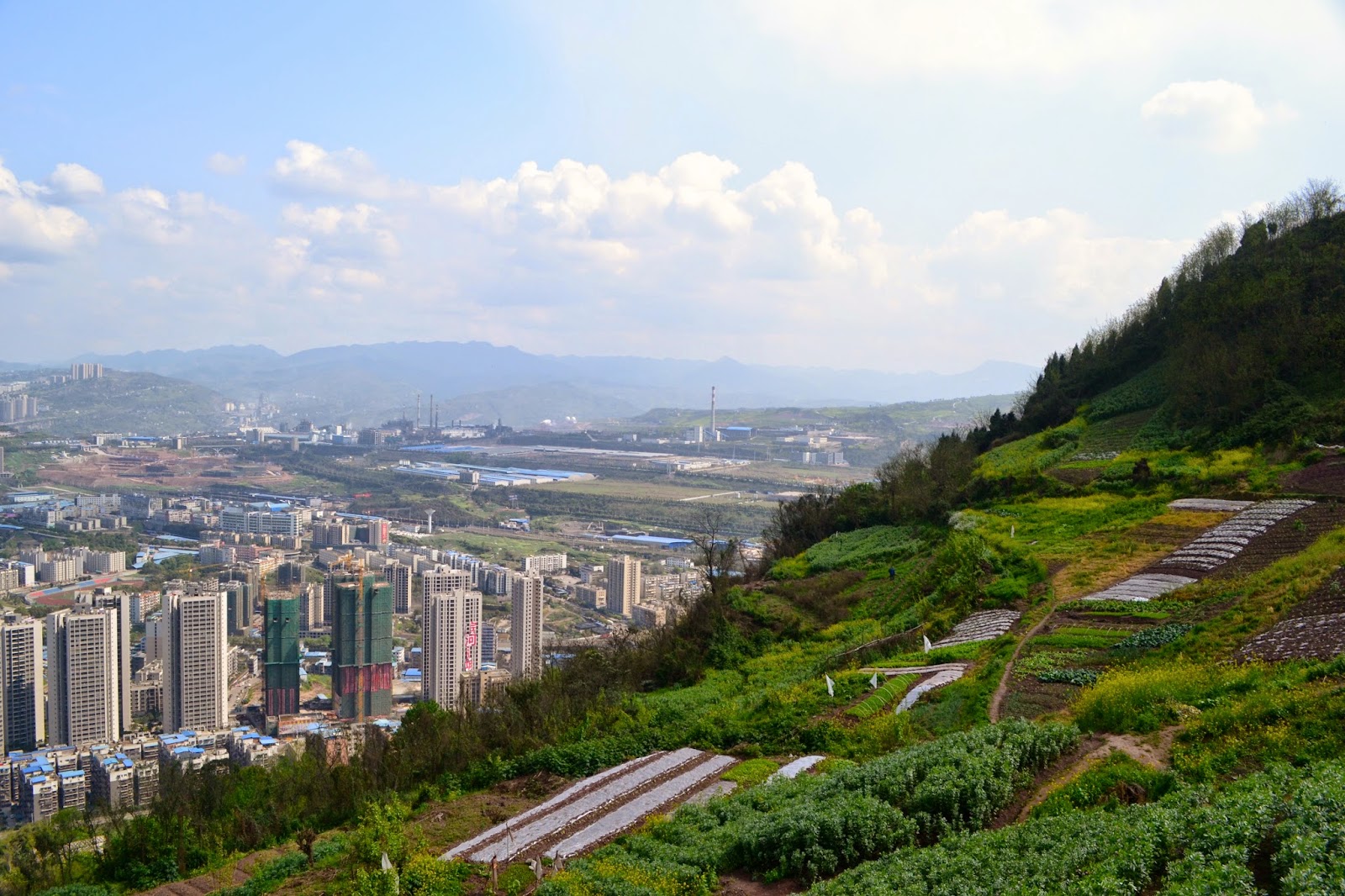 I took a couple students hiking to Peace Mountain on a nice day. We spent the entire afternoon sitting atop the mountain cooking in the sun. After being blanketed by gloomy stratus for a month it is amazing what the sun can do to rejuvenate your spirits. It is a truth, living in China for over a year does force you to appreciate a clean natural environment much more than you thought possible.

I have used the shot above before, but I wanted to get a better quality image. No smoking smokestacks in this one, but it still starkly illustrates so many prominent conundrums and quandaries facing China today. 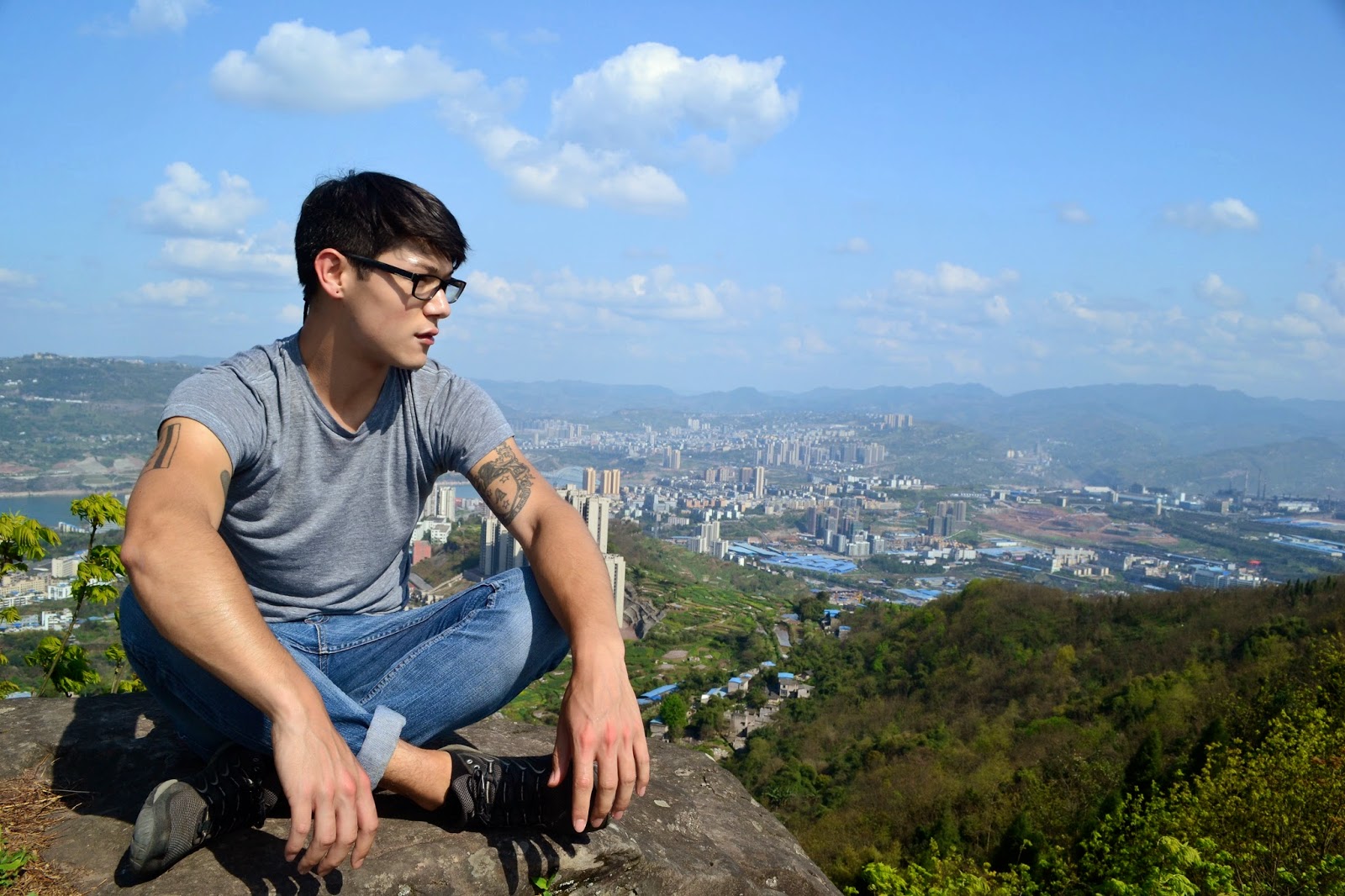 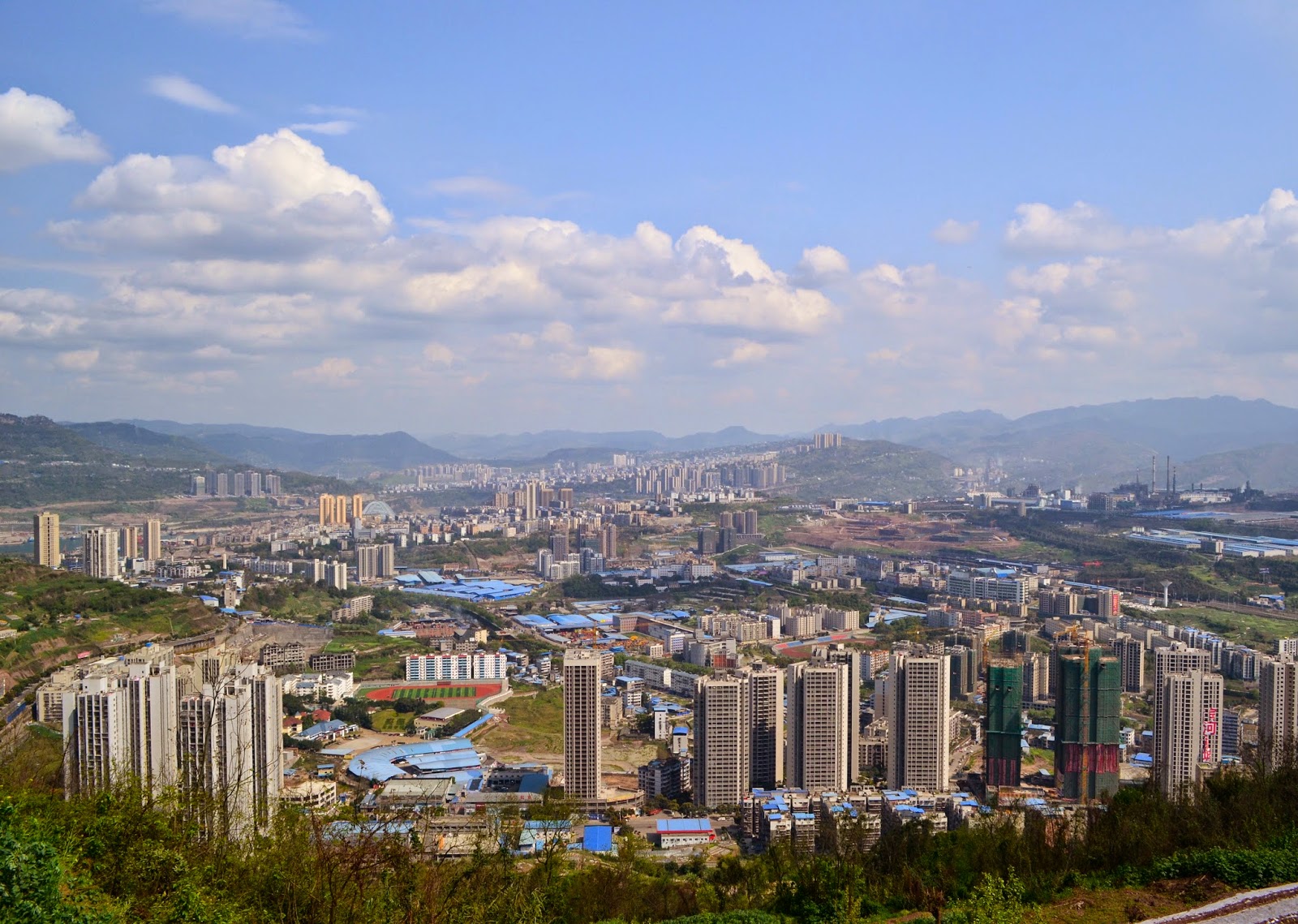 If you can see the the circle created by the framing of the mountain in the picture, this is South Longbao, the district I have been living in for 1.5 years. My district is known best for the train station, car dealerships, wood storehouses, and my school. 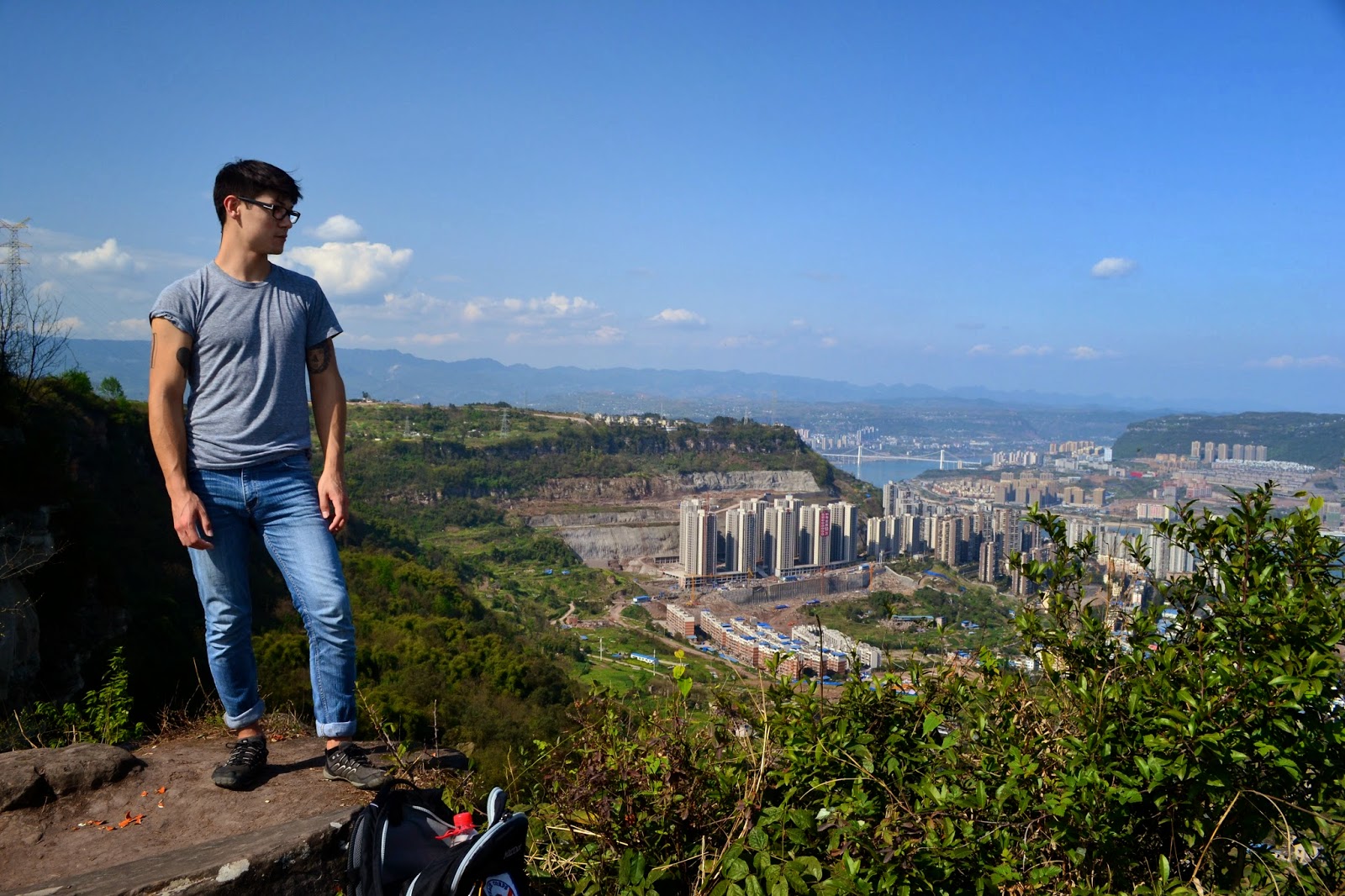 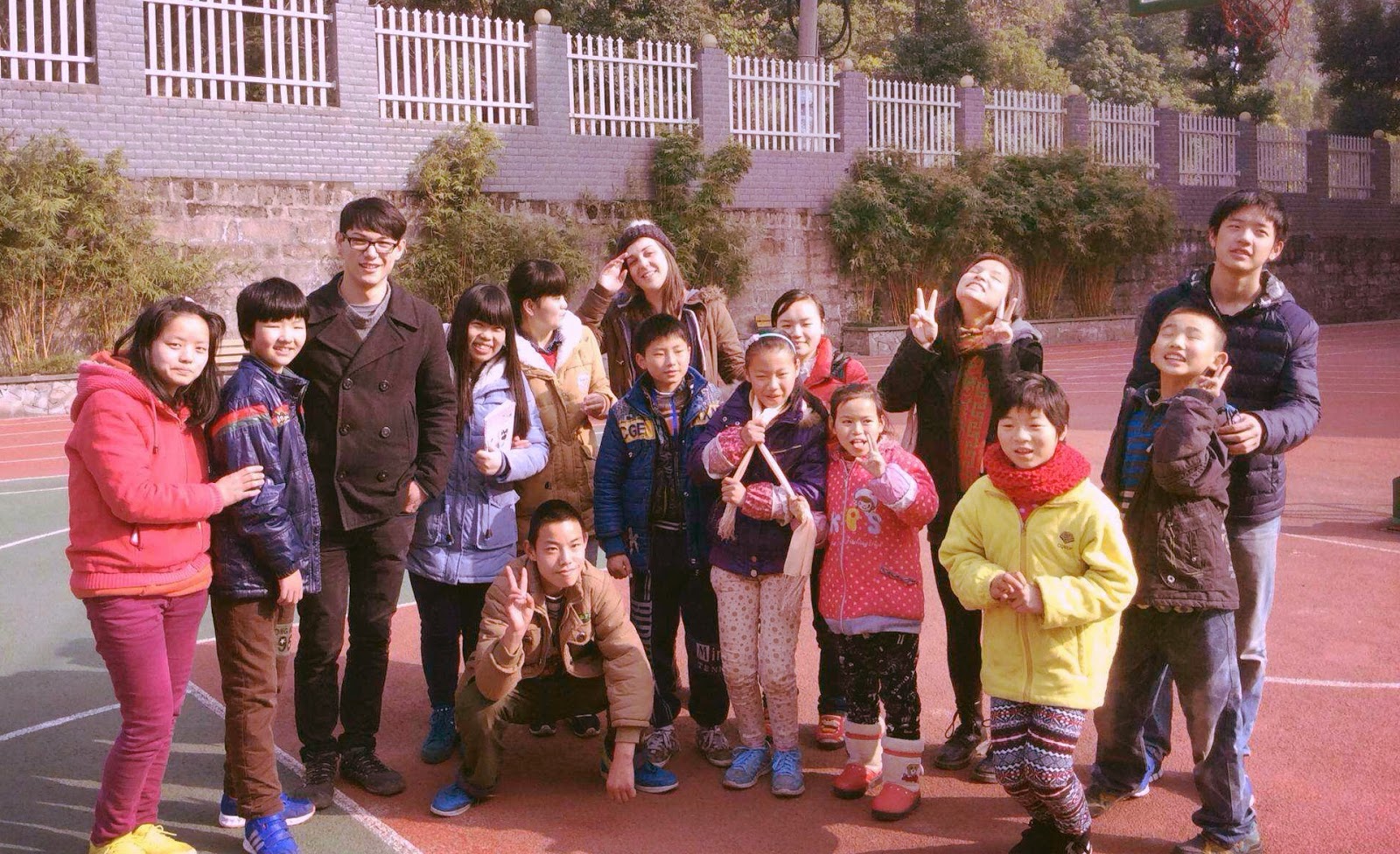 Maivy, our English friend Becky, and I have been volunteering at the Wanzhou Special Education Center almost every Saturday morning since last semester. Most of the children at SEC are deaf and mute, or have slight mental disabilities. Ages range from 8-18. There are about 2000 students, which is very small for a Chinese school. The school is a compound, meaning the children rarely leave unless their families live inside the Wanzhou city limits.

Many of the children come from impoverished families in the countryside, which is really rough living, so as repulsive as the conditions are at this school, it is a very good deal for them. Since Confucian times Chinese attitudes toward mental or physical disabilities has been to make fun of it or express disgust. Attitudes had been nearly unchanged until Deng Xiaoping came to power, when his handicapped brother (who was paralyzed after jumping out of a window to escape persecution from the Red Guard during the Cultural Revolution) decided to use his influence to change policy. Attitudes are towards disabilities are changing in China, but there is still much to be done. 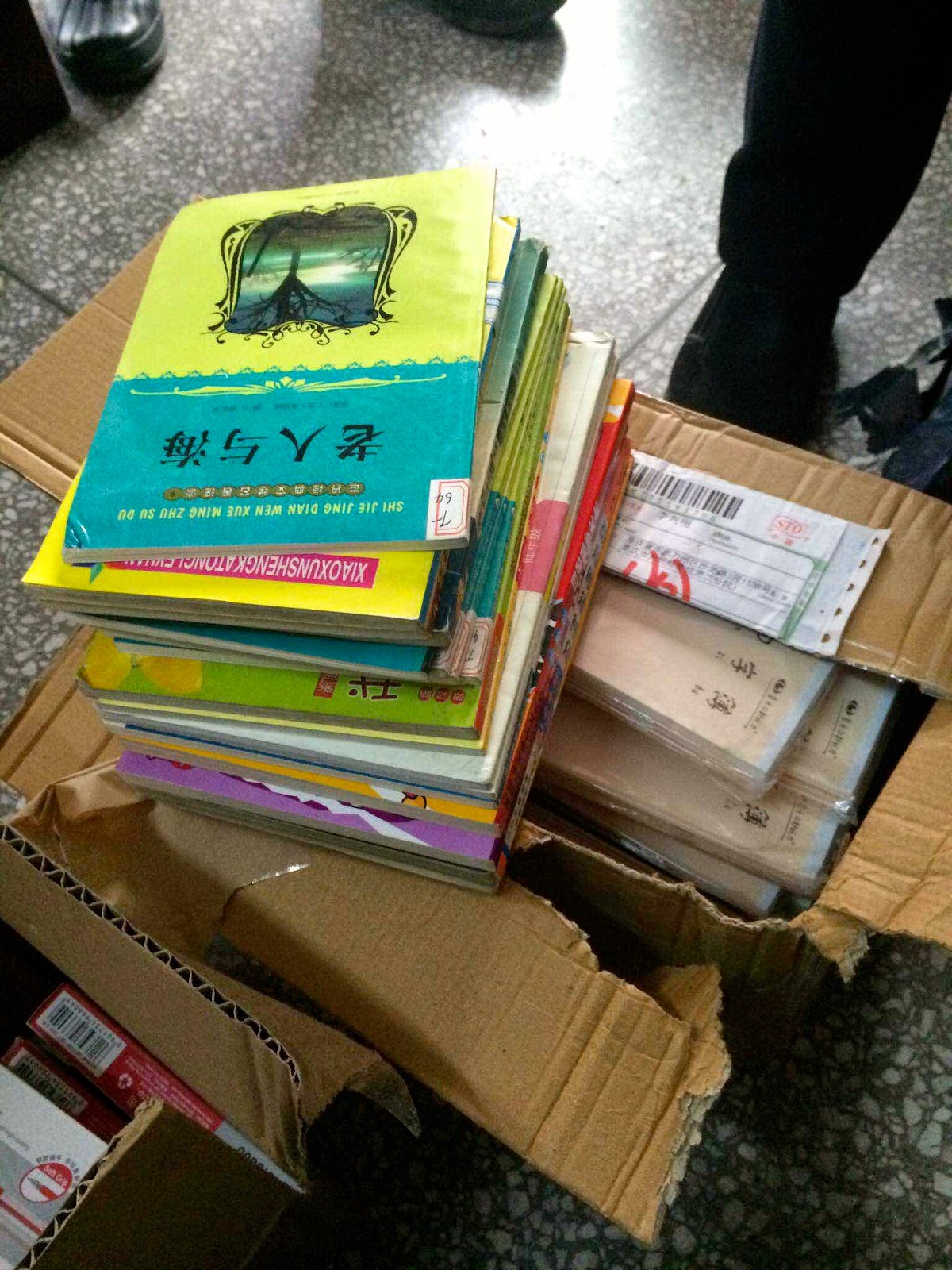 One of my friends in the fashion industry in Shanghai decided to make some donations to SEC. At first, winter clothes were to be donated, then the seasons changed faster than anticipated (we were slow), so now SEC has tons of new school supplies and books. Packages are still arriving as I am told. What makes me happiest is that there is some Hemingway stashed in that pile of books. 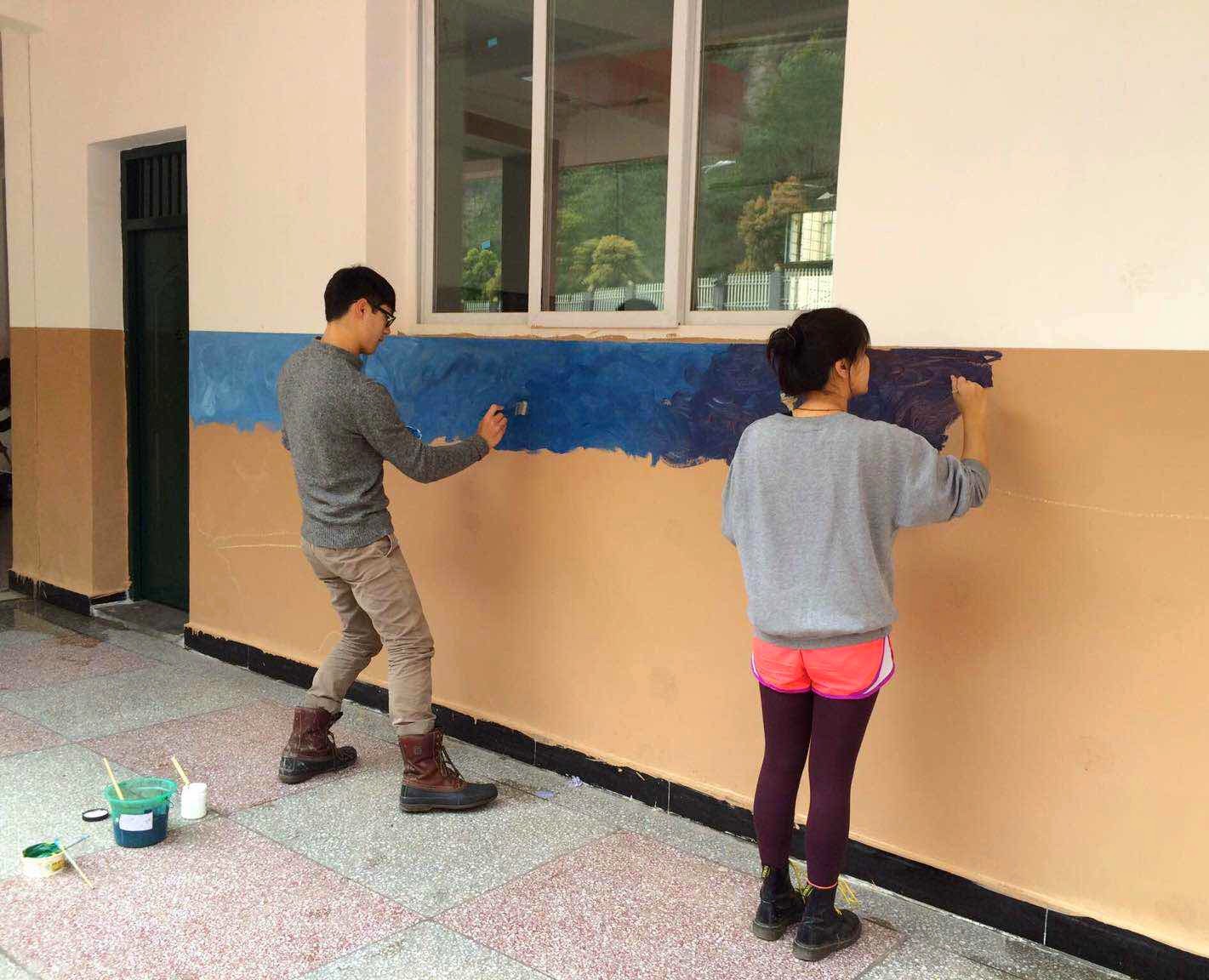 We started a mural project last weekend at SEC. Maivy the visionary, proposed that we paint American landmarks, geographically accurate, from West to East. Without any leverage, for I have never had any talent or skill in the fine arts, I agreed, without descent. Really I am trying my best to not destroy Maivy's mural. I hope we can get it done in three weeks. 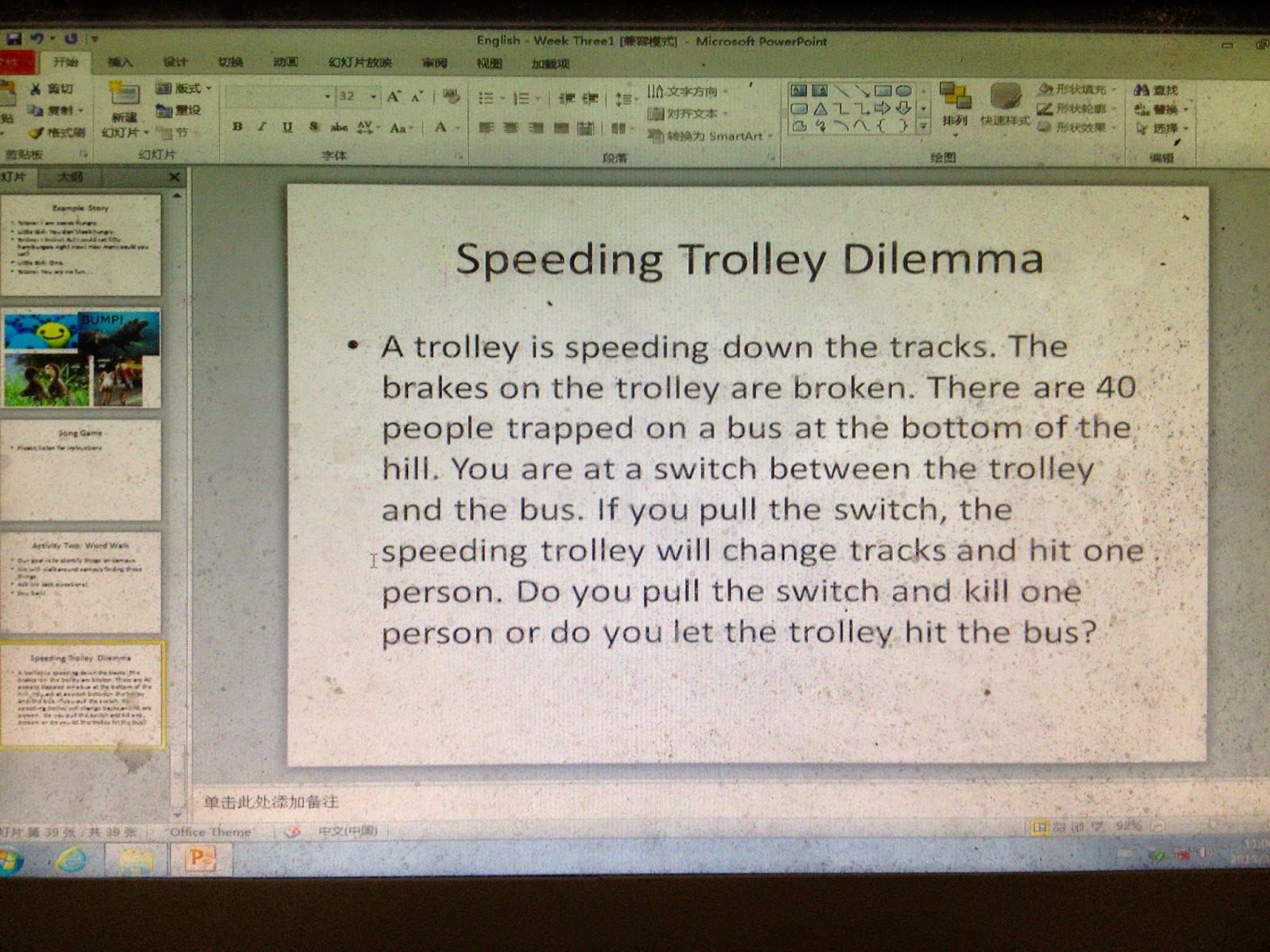 This week I gave an impromptu lesson on ethics. I didn't feel like teaching them vocalb and stuff, so we worked on something more beneficial, some basic ethical questions and ideas. Since the segment was off the dome, drawing back on knowledge I learned in college over two years ago, if what is typed above is not exact to the model, you must understand. For low level English speakers my lesson worked really well. They were all into it, especially when I substituted the lever for the 'fat man.' The trick to keeping them interested is to not use words like, Utilitarian, it distracts them and makes them nervous because the fun has become didactic. I have taught ideas from Daoism and Existentialism before and tried to teach them closely enough as to fuse them. My students love learning about the nature of things in the Daoist sense, fatalism, and self-actualization, all nearly to a blinding point. I never use anything technical, always imagery, analogy, and metaphor. 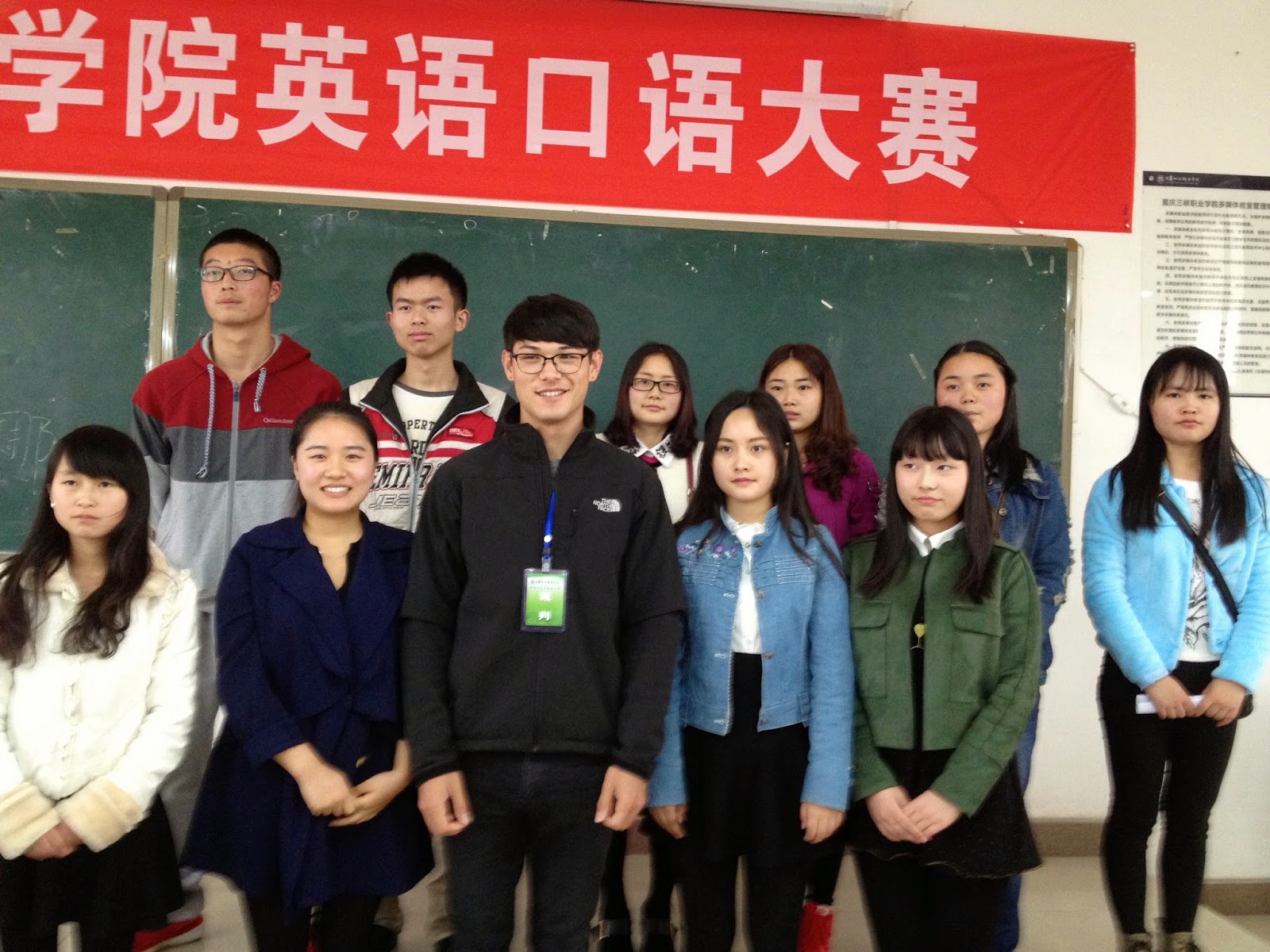 I led a speech competition the other day, officially as the QUESTION MASTER. My students comprise fifty percent of the winners, all pictured above. I am extremely proud of them, but next week we are going to learn how to smile for a picture haha 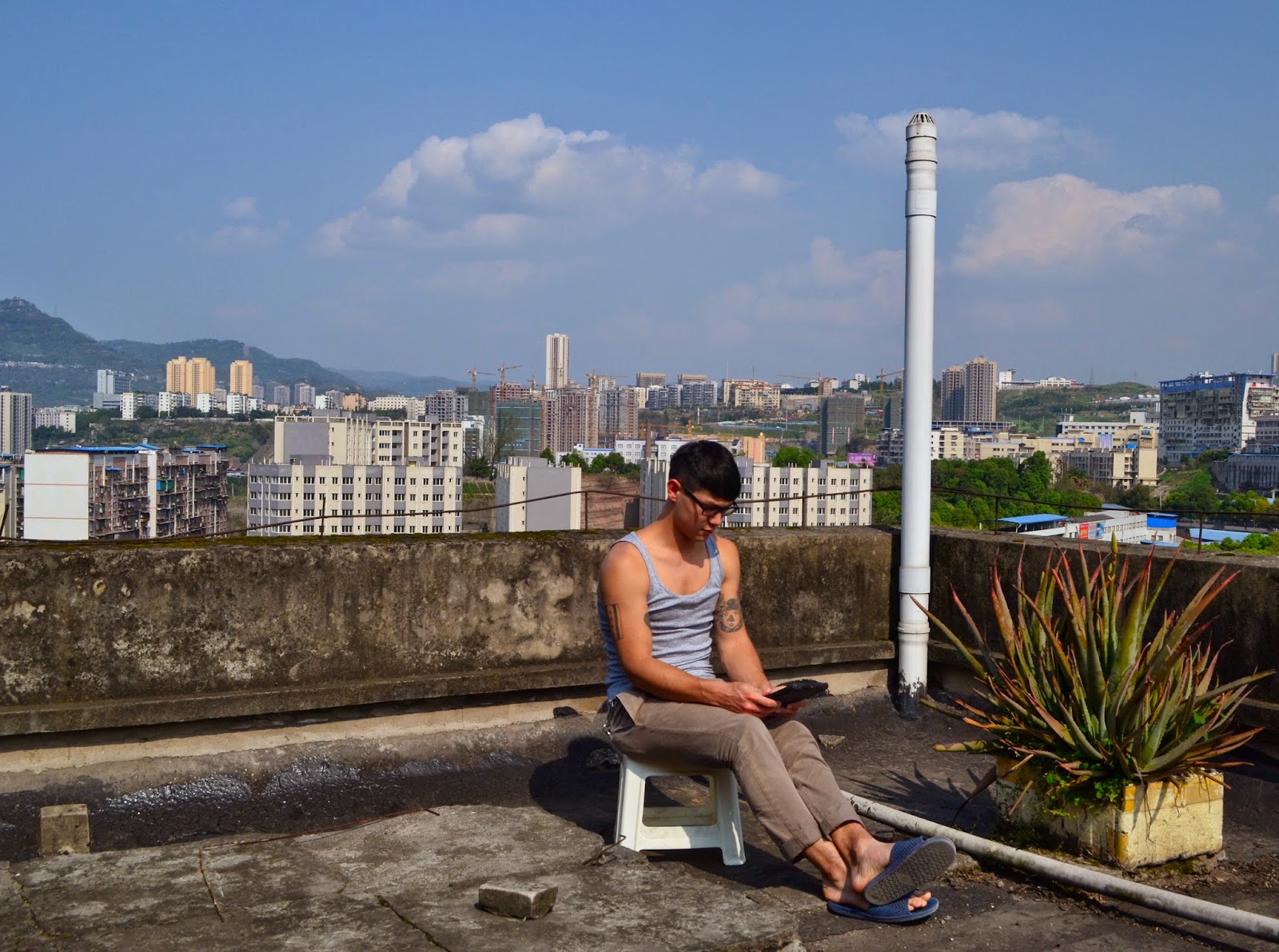 Life is pretty awesome in the Spring in Wanzhou. When I am not working or with friends I do this. Go to the roof, read, sit in the sun, maybe talk to the old ladies who come up to tend to their gardens. I can never understand anything they say, but I smile.