Biking Wanzhou City: Pt. 1 of Many

The Peace Corps has sent me to teach Oral English at the Three Gorges Dam Vocational College in Wanzhou, a 'suburb' of  Chongqing. If you have read Peter Hessler's River Town, Wanzhou is two or so hours down the Yangtze River (the third longest river in the world) from Hessler's site in Fuling. I will be living in Wanzhou for the next two years. A post on Wanzhou is in its early stages. There are five other Volunteers teaching in Wanzhou, including my amazing sitemate, Gabby. If you see this, know that I am continually thankful for your guidance and veteran insight. Now, moving on . . .

My palace in Wanzhou: 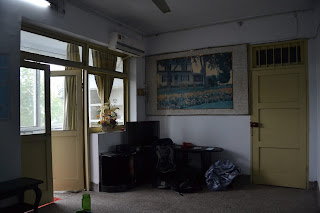 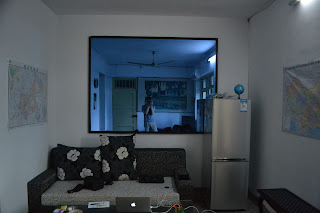 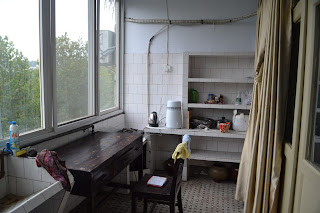 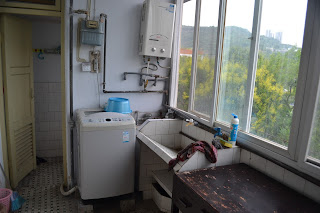 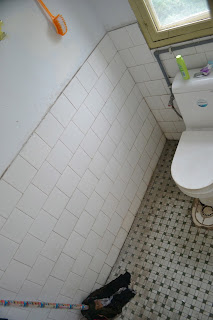 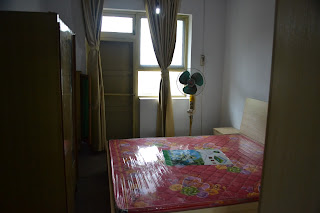 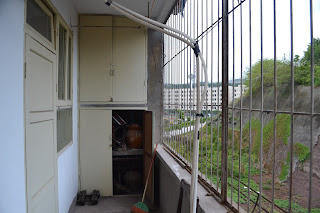 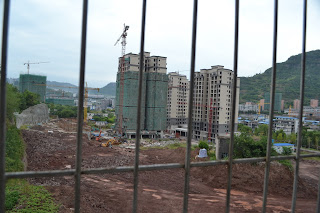 
To shift to our topic, I bought a bike the other day. Although one bus fare in Wanzhou costs 1 kuai (16 cents USD), the buses drive slow in the mountains and stop in practical places, rendering the hapless explorer largely immobile. Even though my purchase might be seen as exorbitant by the virtue of the PC, I believe it is fully justified by its potential for fun.

A map of Wanzhou City I marked up for you: 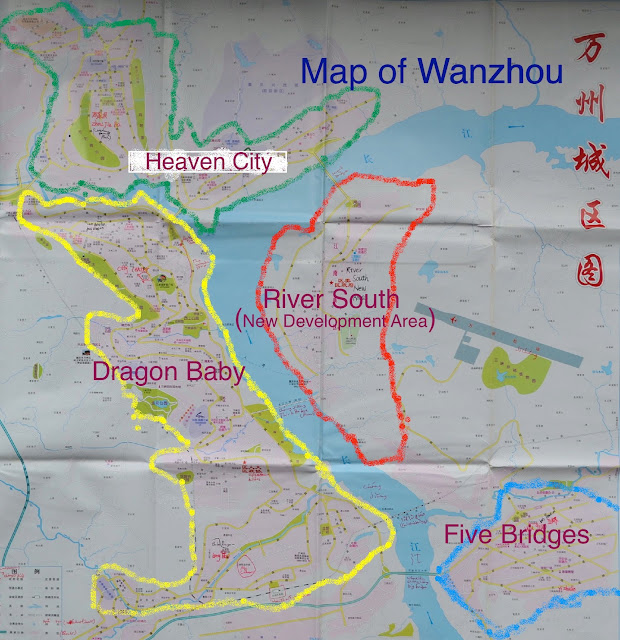 To make it easier for non-Chinese Language speakers and students I translated the names of the subdivisions into English myself. The translations have been edited by Wanzhou natives and the boarders were traced by their fingers. Above are the four primary subdivisions in Wanzhou. If you can see it, I live and teach in the little red circle at the south end of Dragon Baby.

I set out at around 10:00am with two slices of bread and a bottle of water. I rode South. Past the South border of Dragon Baby and into a very dusty industrial area. Massive trucks hauling rubble, dirt, and barrels roared by me heading uphill. All incline. Passing old peasants carrying their crop. It is hot. There are no clouds only sun and blue. My goal was to break the Wanzhou City limits and ride into the countryside. After passing the 'Chemical Industry Park (which is certainly not a park but the small area outside of what I suspect is a chemical factory)' three times, I decided to double back and look for a mesa like mountain that had grabbed my attention the day before from a long distance bus. 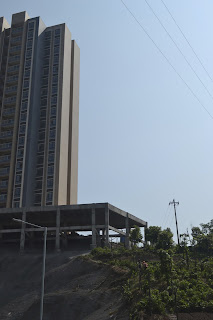 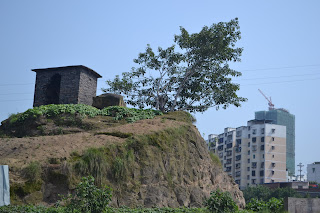 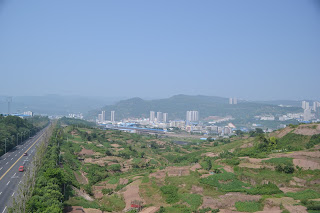 View from the bridge leading to 'Chemical Industry Park' 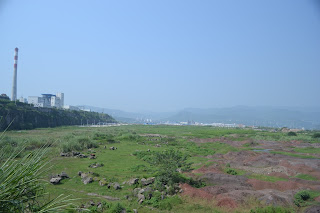 A factory hangs over receding farmland

I knew the mesa was somewhere in Five Bridges, so I crossed the towering bridge that connects Baby Dragon to Five Bridges. The official name of the bridge is literal, 'Big Bridge.' The reverse catenary (idk, bu xiao dei . . . thing) of this bridge is gaping - you could fly a fleet of spaceships through it. 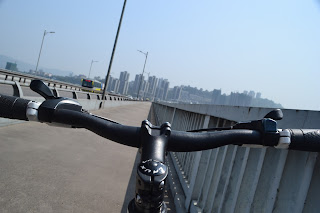 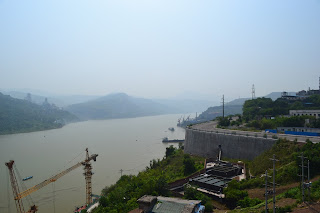 Ports and development on the Yangtze 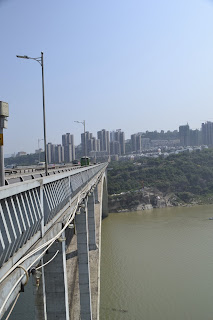 After crossing the Big Bridge, I rode North in search of the mesa. After riding for 20 minutes I spotted it! The next issue was figuring out how to get to the top of it. I realized that I was not in the US and the mesa had not been developed into a river lookout, yet. From where I stood, I could see a little ridge that connected to the back of the mesa. It was covered with little planting sections, so I figured I'd have to talk to some farmers in order to gain access to their backyard. Riding on, I passed a dim little dirt road covered by low trees. There was garbage burning at the entrance. There were a few dogs and lingering and a thin old man sleeping on a stone slab. After realizing that I had ridden too far and obviously missed the entrance, I decided to try the dim road. 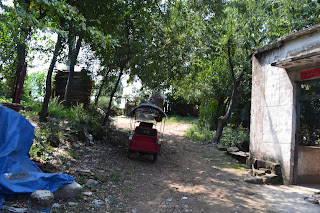 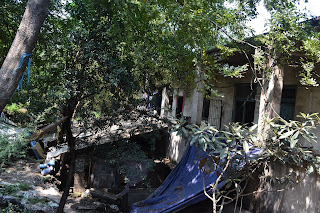 I rode downhill. I did not see anybody but could hear yelling (which is usually friendly in Chongqing). Over trash, mud, and loose rocks I thought about turning back. I thought of the consequences of trespassing and ways to redirect a confrontation. And then the trees cleared. 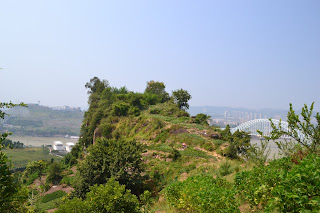 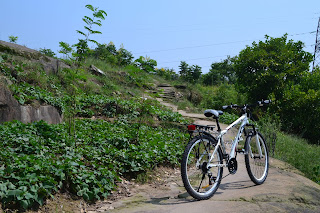 I parked my bike to hike 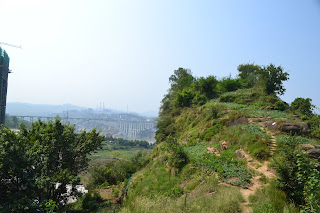 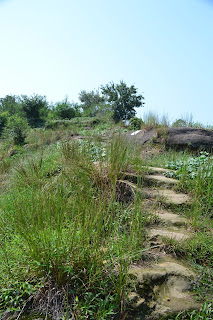 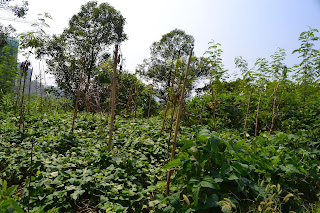 The top was filled with planting beds, some fresh and some ancient 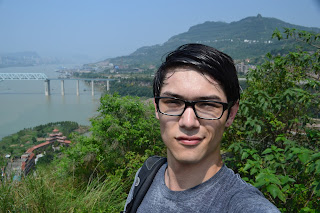 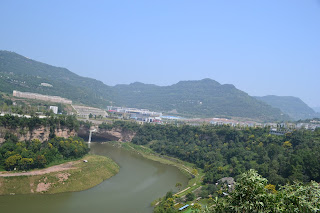 Maybe its because I am from the Midwest and we have nothing like this, like rarely will we, if ever, have a need for vocabulary like fjord, but I am always in awe of natural scenery involving elevation, trees, and water. 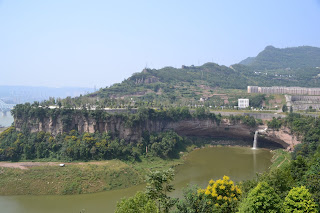 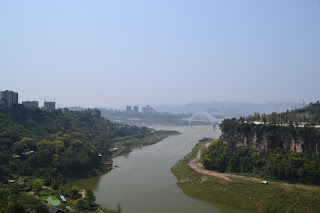 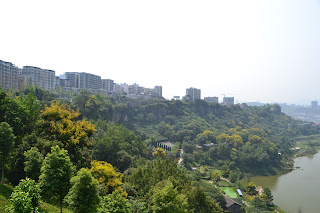 In order to walk to the waterfall I had to cross a stream littered with garbage runoff and possibly miscellaneous diseases. To fear the plunge is not out of fear of getting wet or slipping or being swept away by the current, but by contracting a skin infection or whatever. A video of the crossing for you.

I got back to my apartment at around 3:00pm, made noodles, and then went to help set up the English Library. 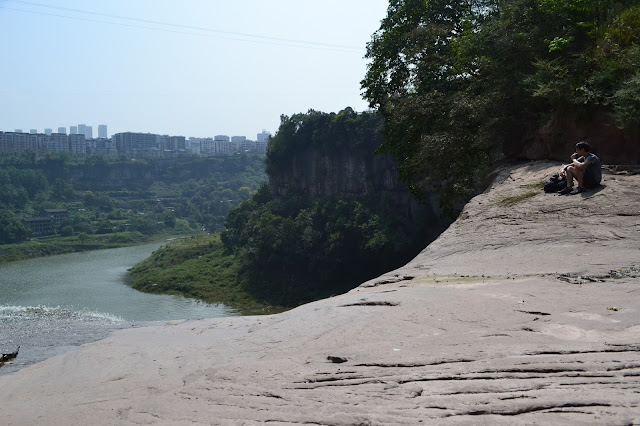 Come to Wanzhou! I will take you to these places!

Posted by Unknown at 7:50 AM No comments: