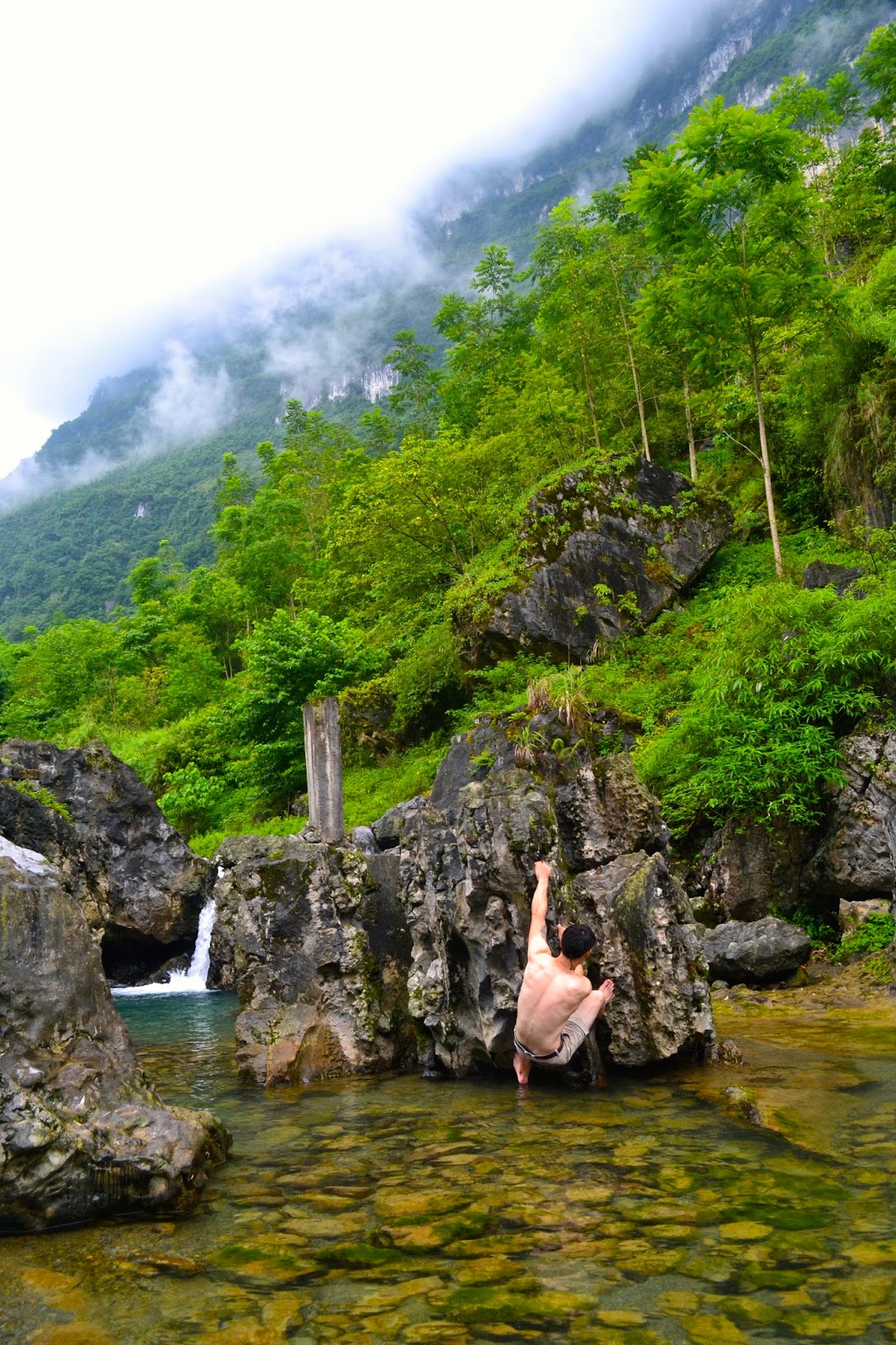 After coming from bouldering in Western Sichuan, Kayla and I only had three days before we had to be in Pengshui, Chongqing for PC China Summer Project. Pengshui is only a couple hours south from Wulong, Kayla's site, so we opted to stay there for a couple days. I found out that one of my students was from Wulong before the end of the school year and told him that I would show up sometime during the summer. On the train to Wulong, I called him and told him that I would be at his place the next afternoon. He told me that it was a three hour bus to his place and I said there would be no problem.

The next morning Kayla and I left to catch a 9:00am bus at the Wulong Bus Station. It turned out that the bus was actually a van and we were sitting in the back row. After sitting on bumpy buses for two days straight coming from Western Sichuan, we weren't too thrilled about this, but whatever. My student told us to get off at the second to last stop. After about an hour of clearing narrow mountain passes, unbelievably vibrant foliage, old wood farm houses (very uncommon), and white clouds slowly skating through the valleys we realized that the place was a different type of rural; the hicks think this place is full of hicks.

At around 1:00pm, we jumped out of the van into a light rain and I hear a calm, "Hello, Jack." My student's English name is Prestige Lee. His is in my Tourism English class at school and he ranks in the top five in the class. There are only three other boys in his class, and we have all grown close through my efforts to keep the 30 girls, most with domineering personalities, from pushing them around too much. 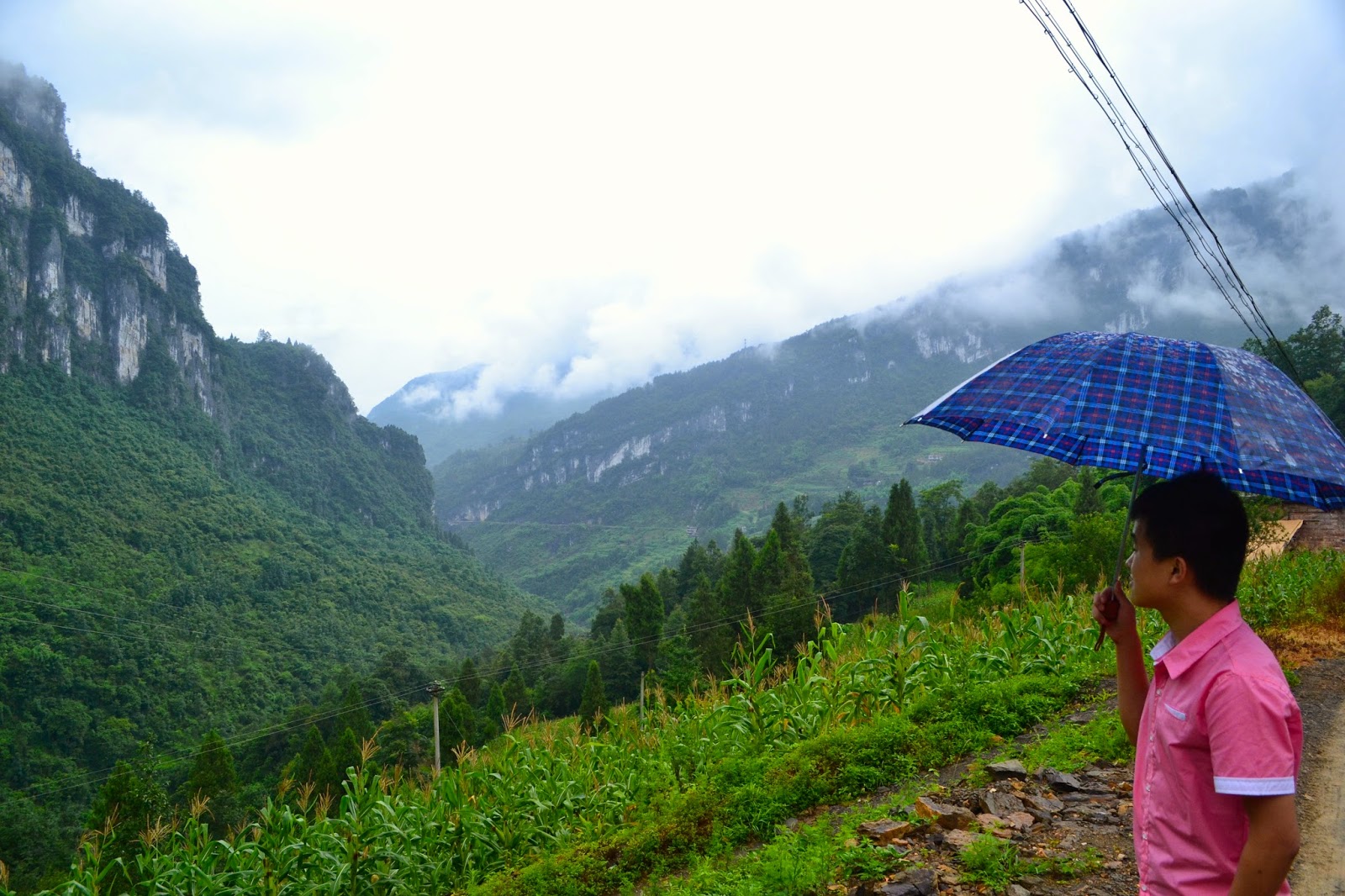 Prestige and the valley below his home

I asked Prestige, "So, when can we catch the bus home? We have to work later today. What time is the bus after lunch?" Without realizing my second question he says, "You will go home tomorrow morning at 6:00am." The only worry I had was legitimate, there were only three buses in an out of his section of Wulong everyday and they are all in the early morning. So, that work Kayla had to finish before Summer Project suddenly got pushed back a day. Welcome to the Peace Corps China. 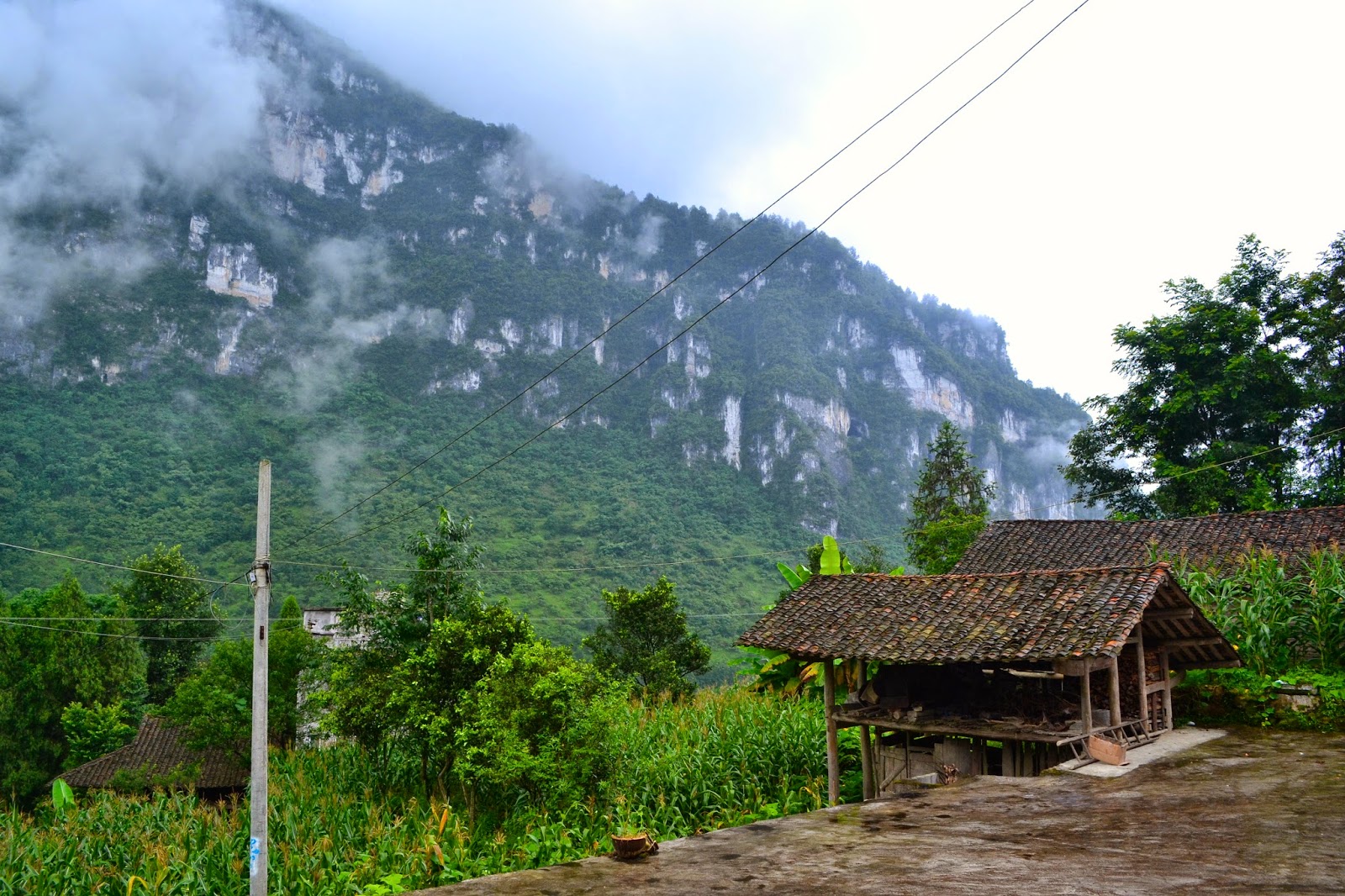 
From the bus stop we hopped into a car that drove us down a narrow orange dirt road with rockfall to his house. As we were getting out my student handed the driver two packs of cigarettes for payment. We walked up to his house and were received by his mother and relatives. They were all women. The men were off working in different regions in China. There were a couple kids running around, all maxed on sugar. 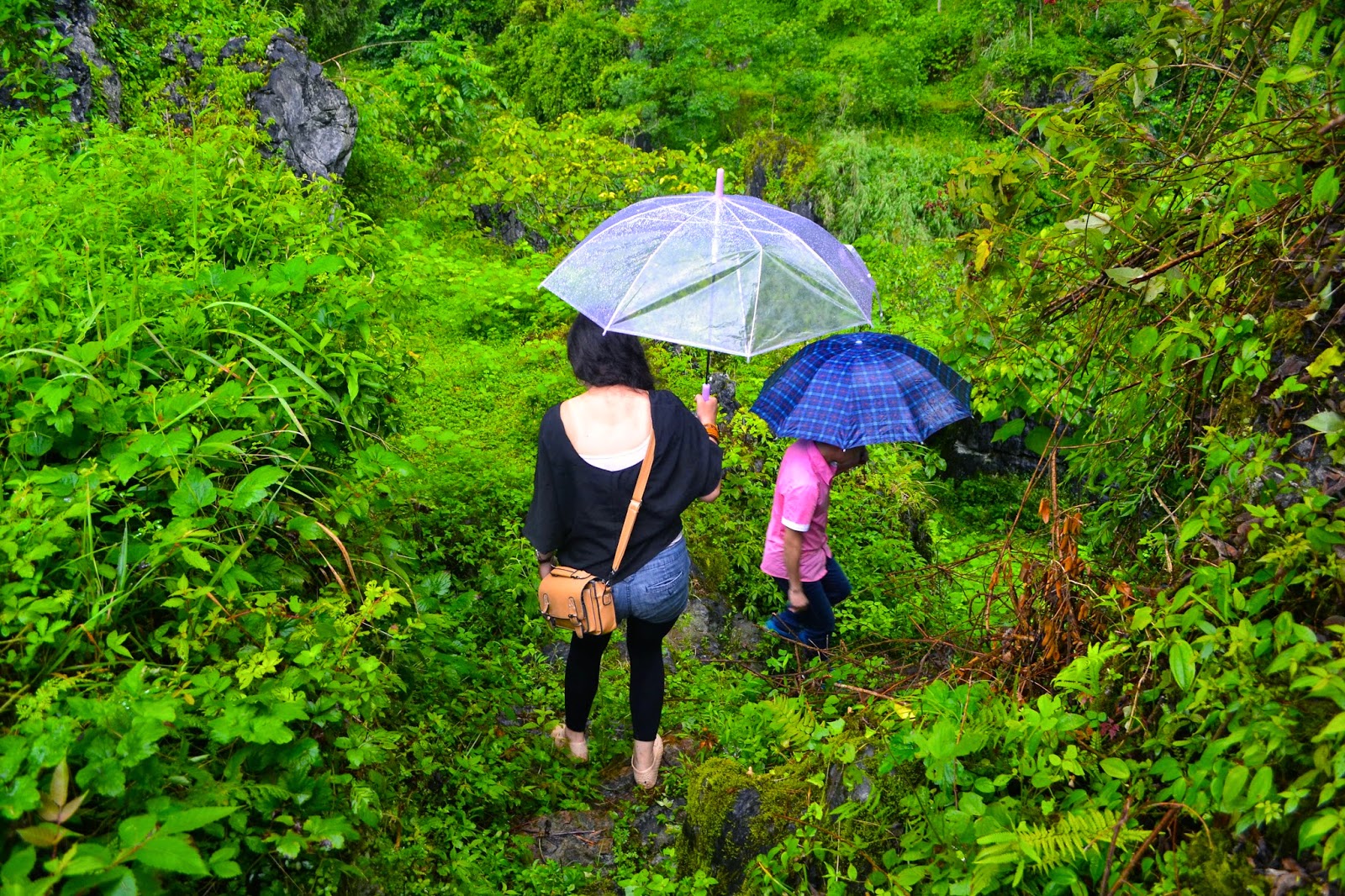 After some convincing, he took us down the mountain to the river


Before the school year ended Presitge told me that he was part of the Miao ethnic minority in China. The Miao are one of the largest ethnic minority groups in China. When we asked Prestige about his heritage, he responded that his family was not always Miao. His family moved to Wulong from Pengshui (a Miao/Tujia autonomous prefecture) a decade and a half ago. A few years a go the government said that any descendants from Pengshui are likely Miao and can claim minority status. So his family became Miao. He explained this to me without any reservations. It seems that the connection is less based on blood, but placed on culture. 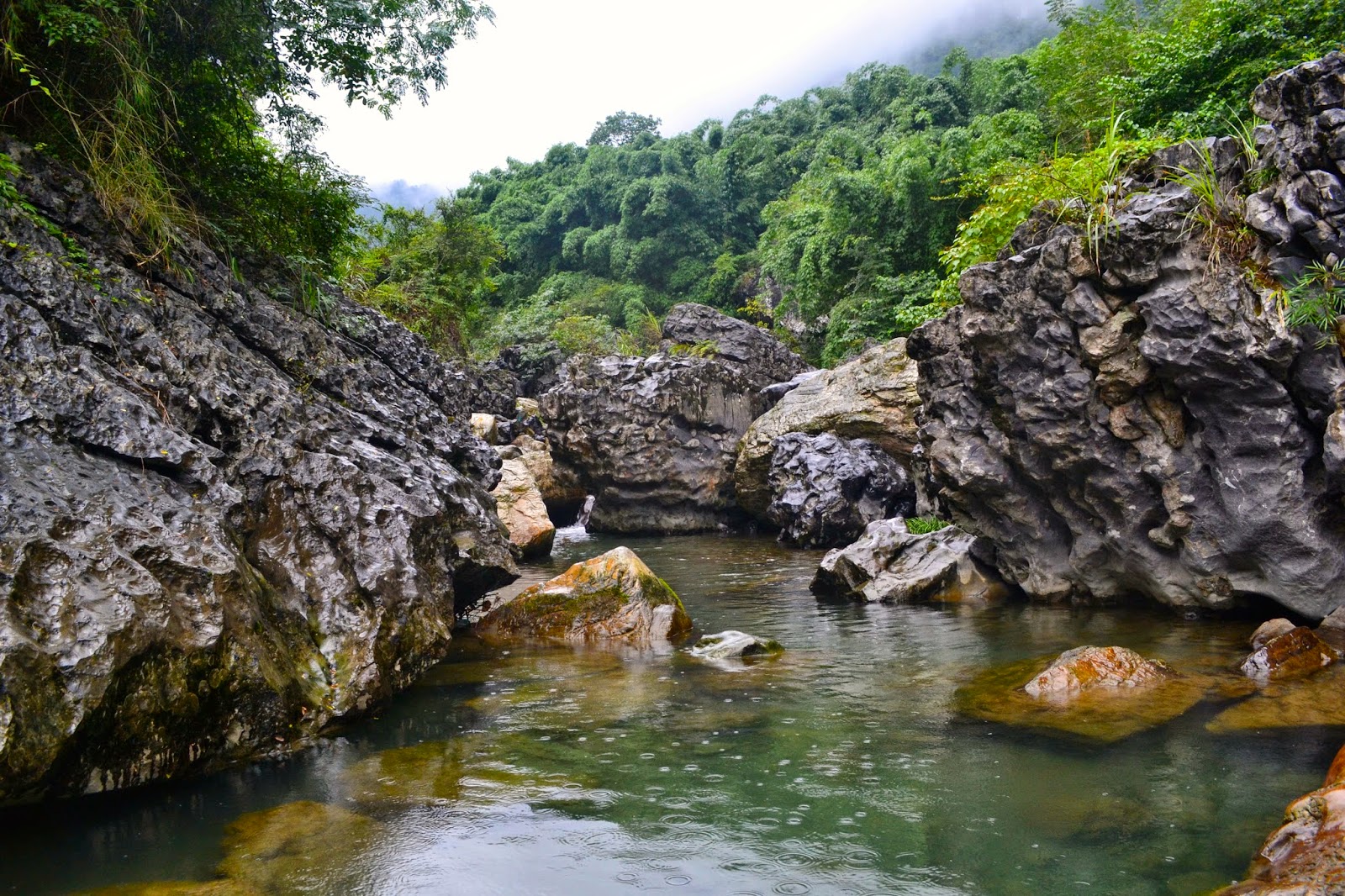 Instantly taken by the beauty 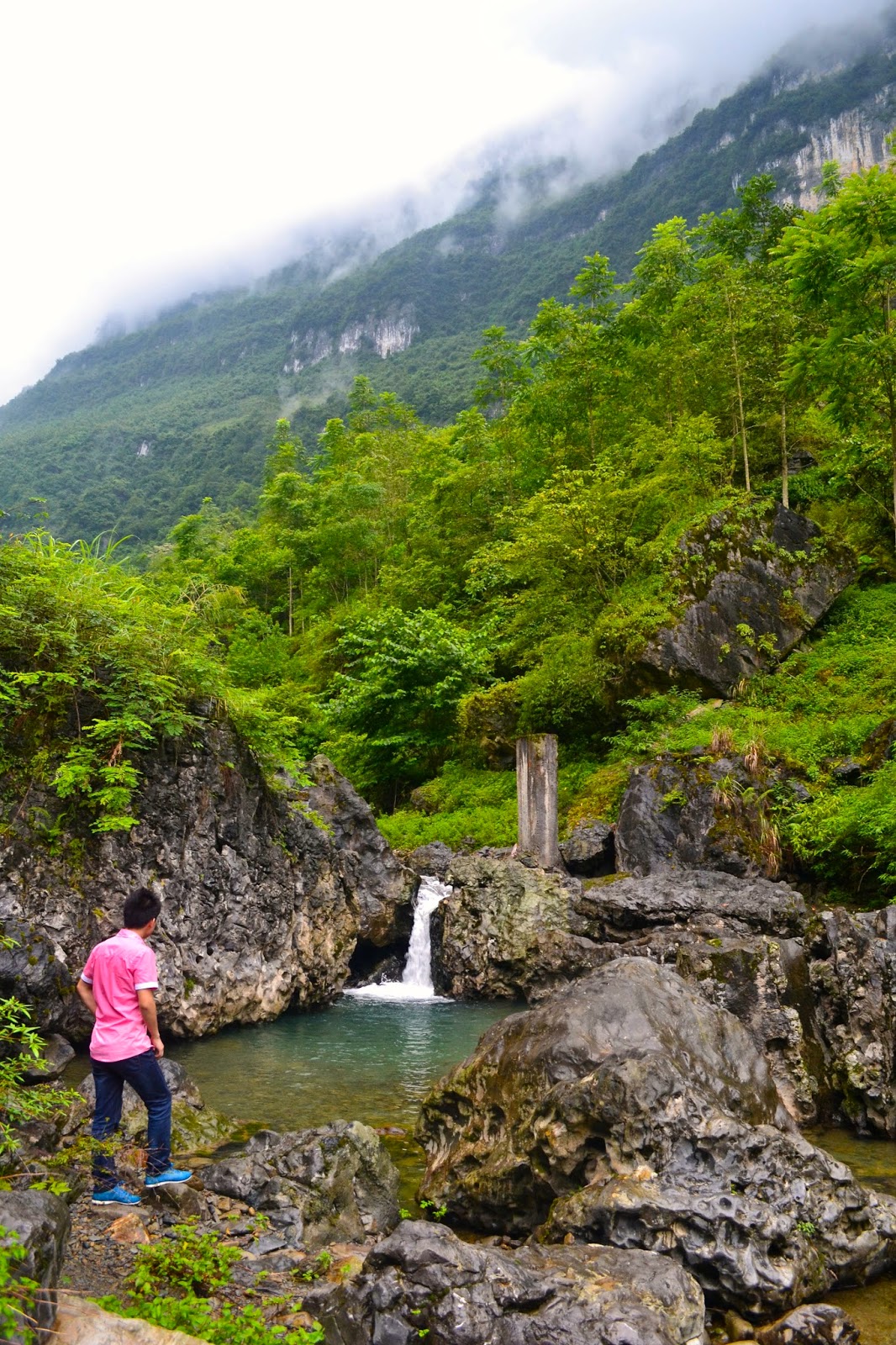 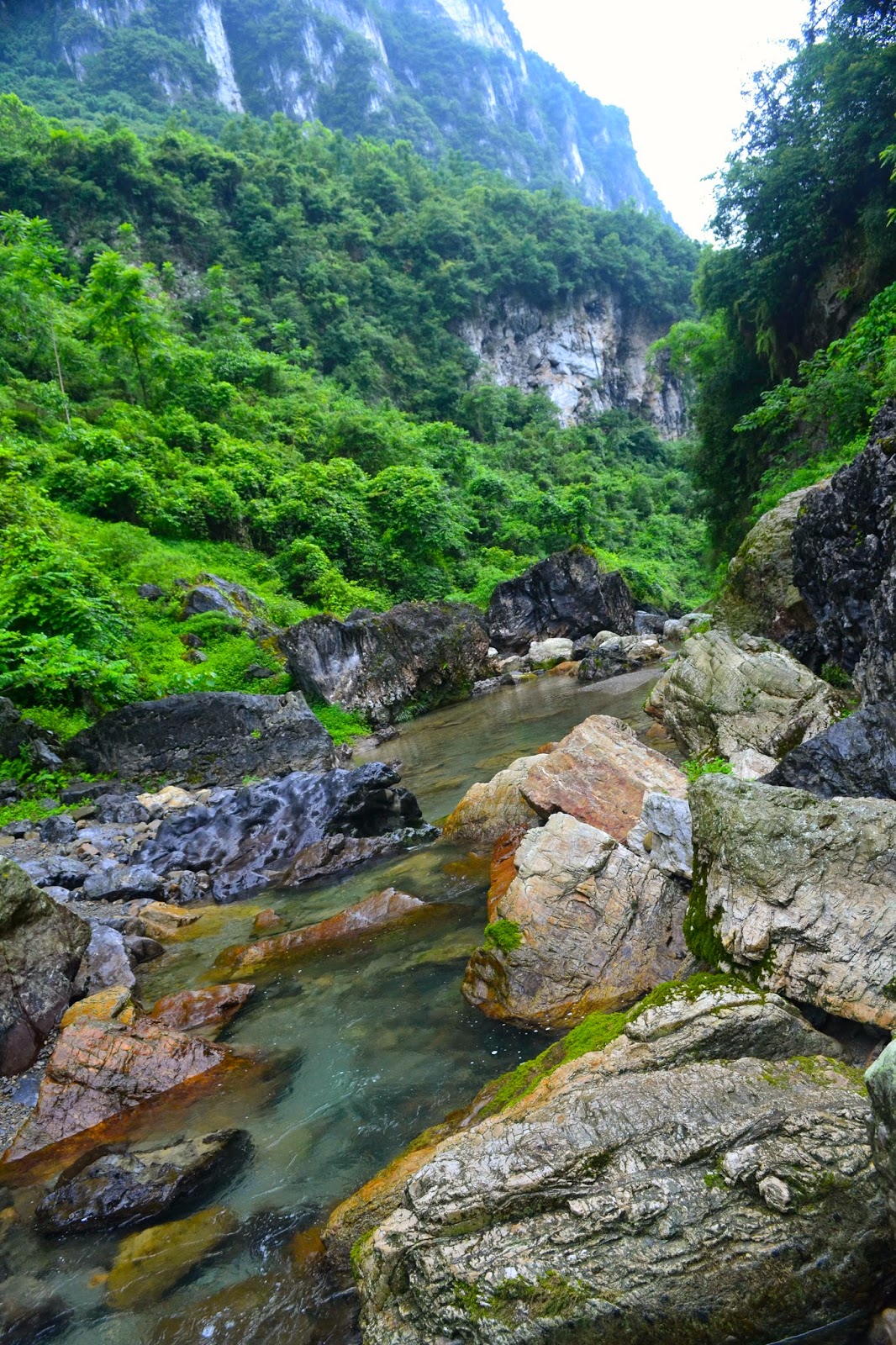 Geologically this place is fascinating. The boulders here look exactly like the boulders in Getu, Guizhou

I noticed there was a reoccurring theme in his comments about his area of Wulong. Went spent a lot of time talking about development in China. Like most Chinese people know, he knows the surge of money will not last forever. He wants Wulong to develop but there is no money leaking down because his area is so remote. He has this idea that if the highway that was drawn to cut through his front yard was built, then economy could be generated and wealth in the area shared. He does not want wealth, but wealth for the people in his area. He genuinely cares about them. Opportunities are slimming as time moves. This is eating at him. 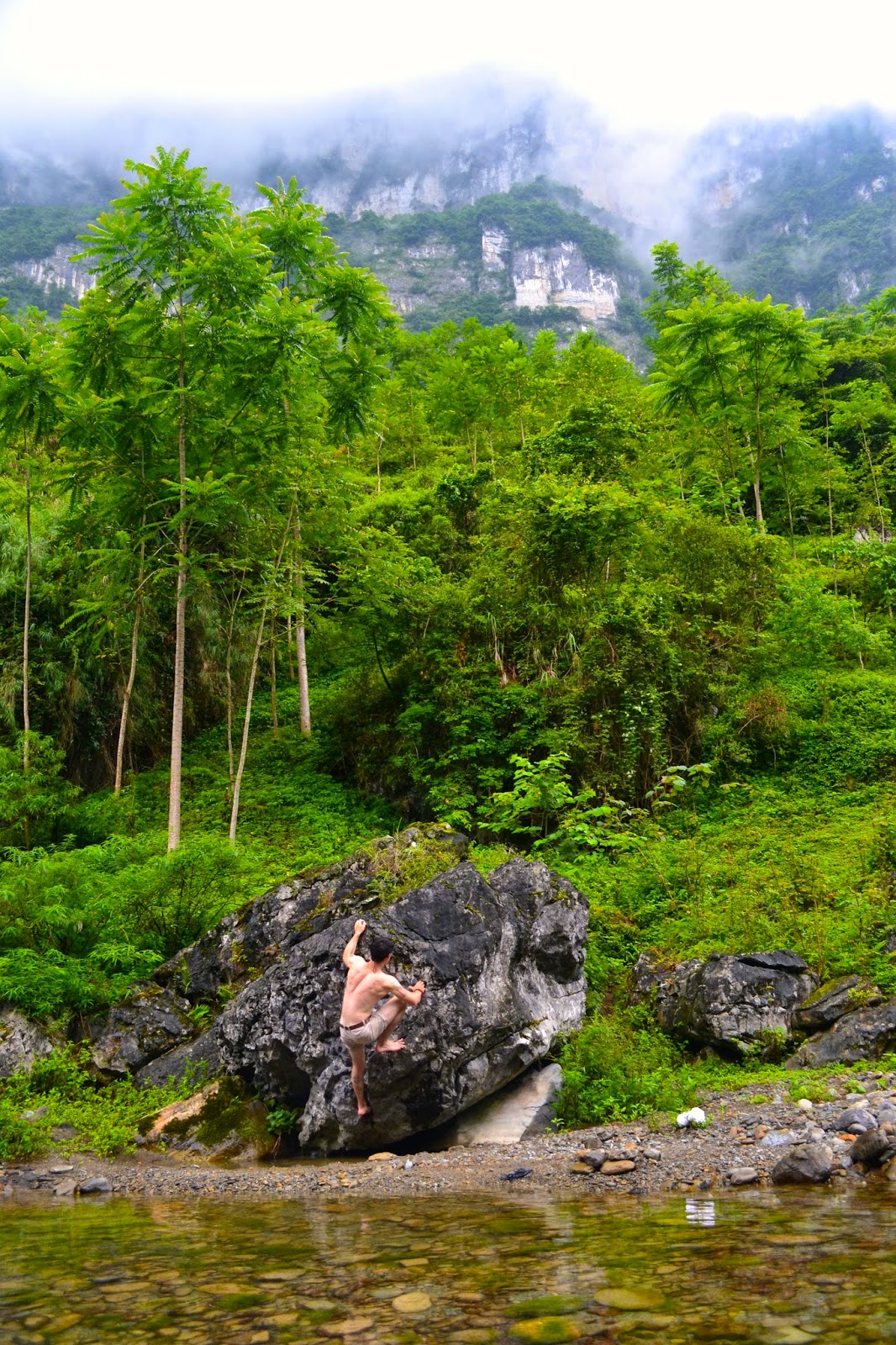 This place is wild in the sense of Jurassic Park

At dinner we had chicken, tofu, corn, vegetable dishes, and Pepsi. All the food was sourced from his backyard. The chicken is called 'tuji,' or 'earth chicken,' I think because it literally is born, raised, and slaughtered in the backyard, which is a wild tropical forest. Totally natural. 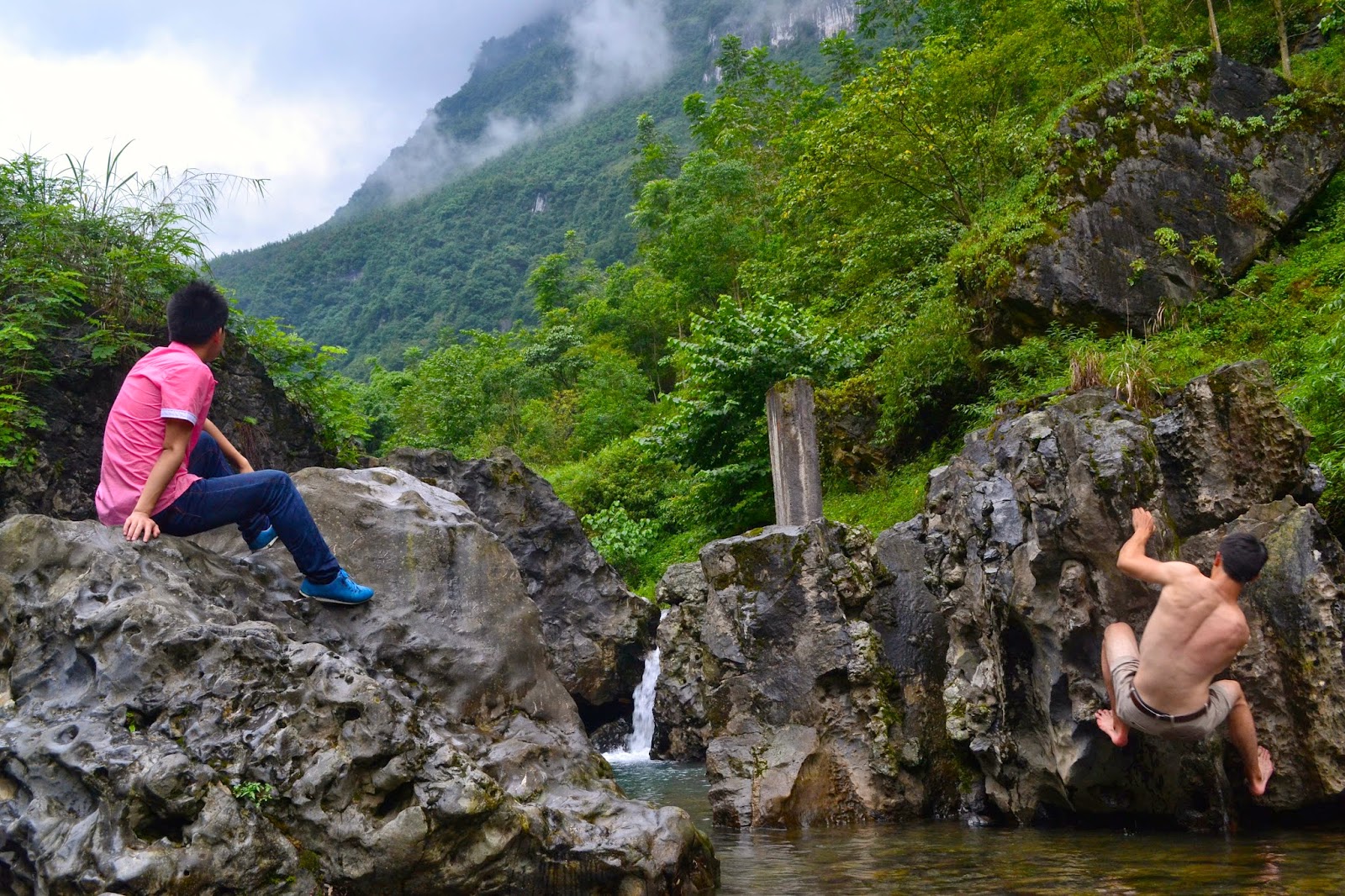 I couldn't resist bouldering in the river 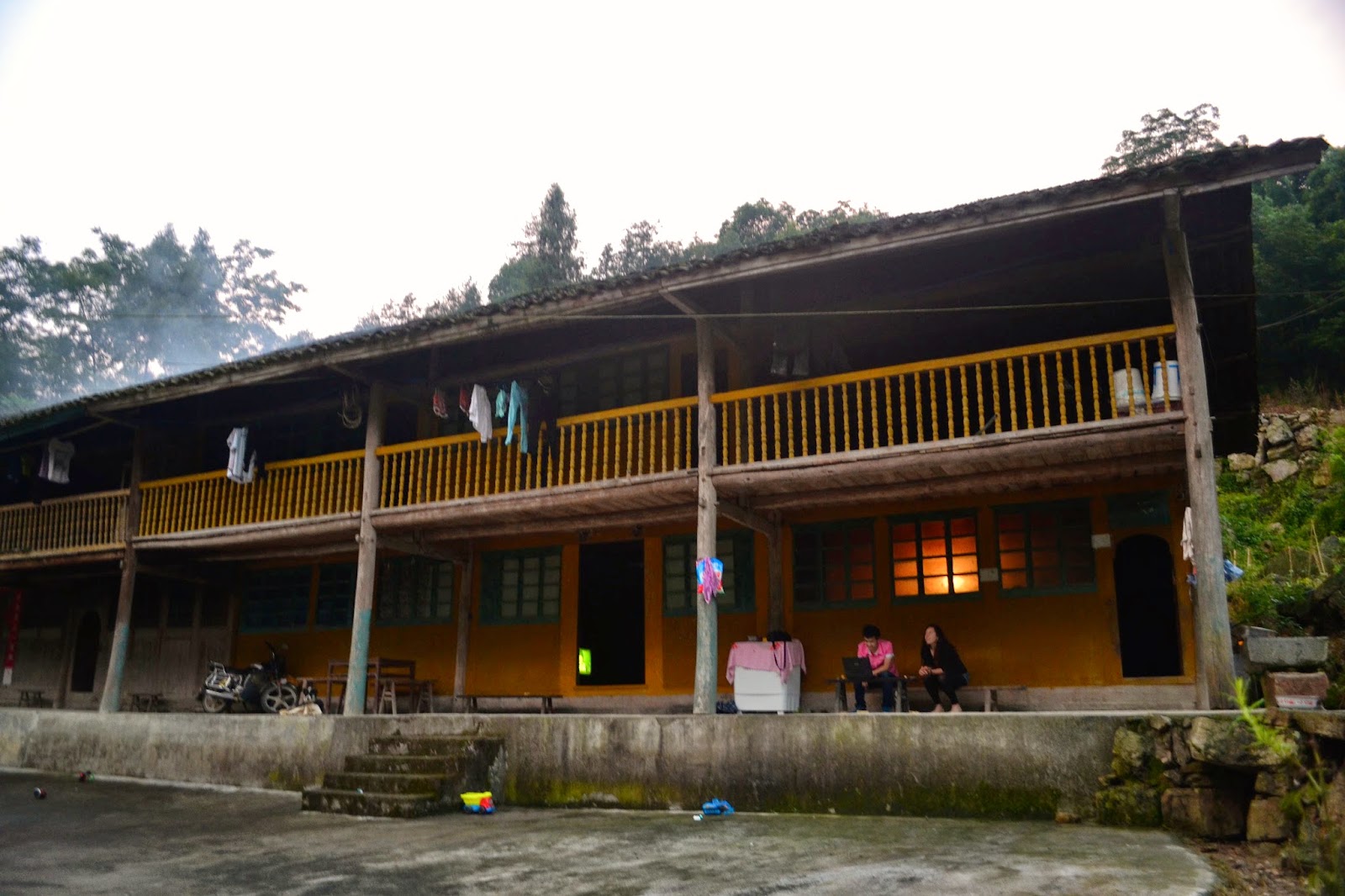 After dinner, we watched a Chinese movie a volunteer had shown him in Wanzhou. His house is huge and entirely made of wood. There are two sections that couldn't fit in the frame.

Whenever I spend time in truly rural places that haven't become dependent on technology (his house doesn't have internet and phones barely work), I realize exactly how urban I am. All things do move a lot slower. Here at least, people are not irritated by siting and staring off into space for long periods of time without anything to do or look at. Sitting next to a person you hardly know in silence is not as worrisome. That urge to say something is not as powerful. Without having news or media inspired topics to talk about, conversations turn towards what you have been doing and family. I spent the night in my student's room on the second floor, which looks like the second floor of a barn, boards creaking, and Kayla shared a bed with his mom. We left for the bus stop before dawn.