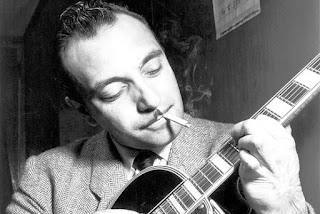 Influentially, he is on par with Edith Piaf, Marcel Duchamp, and John Locke. Born in Belgium (1910-1953), but you can call him French. I like to think of him as a complex combination of flavors. Was raised in the border lands of civilized France. Cart and horse, with lanterns swinging through the night and mud.  Calling him the inventor of Gypsy-Jazz would be unfair, but he certainly is the most prominent to rise in history. His bassists of ninety some records never own his own bass, he rented it from a small music shop monthly, that was their style.  Severely burned in a caravan fire, he lost the use of three fingers on his left hand. Fortunately for the future of music, his index and middle digits were left undamaged. In a letter to a friend, he was cited saying that people ask him for guitar advice all the time, but he didn't know why, "It is sad that I will never be able to play the chords in my head." It is likely that no guitarist will ever invent a "style (pointedly remarked by Djangologists)" as era-descriptive as Django. With complex orient swinging his riffs side to side, he captured the rhythm of a night culture.  We all need more Django flavor.
Posted by Unknown at 10:10 AM