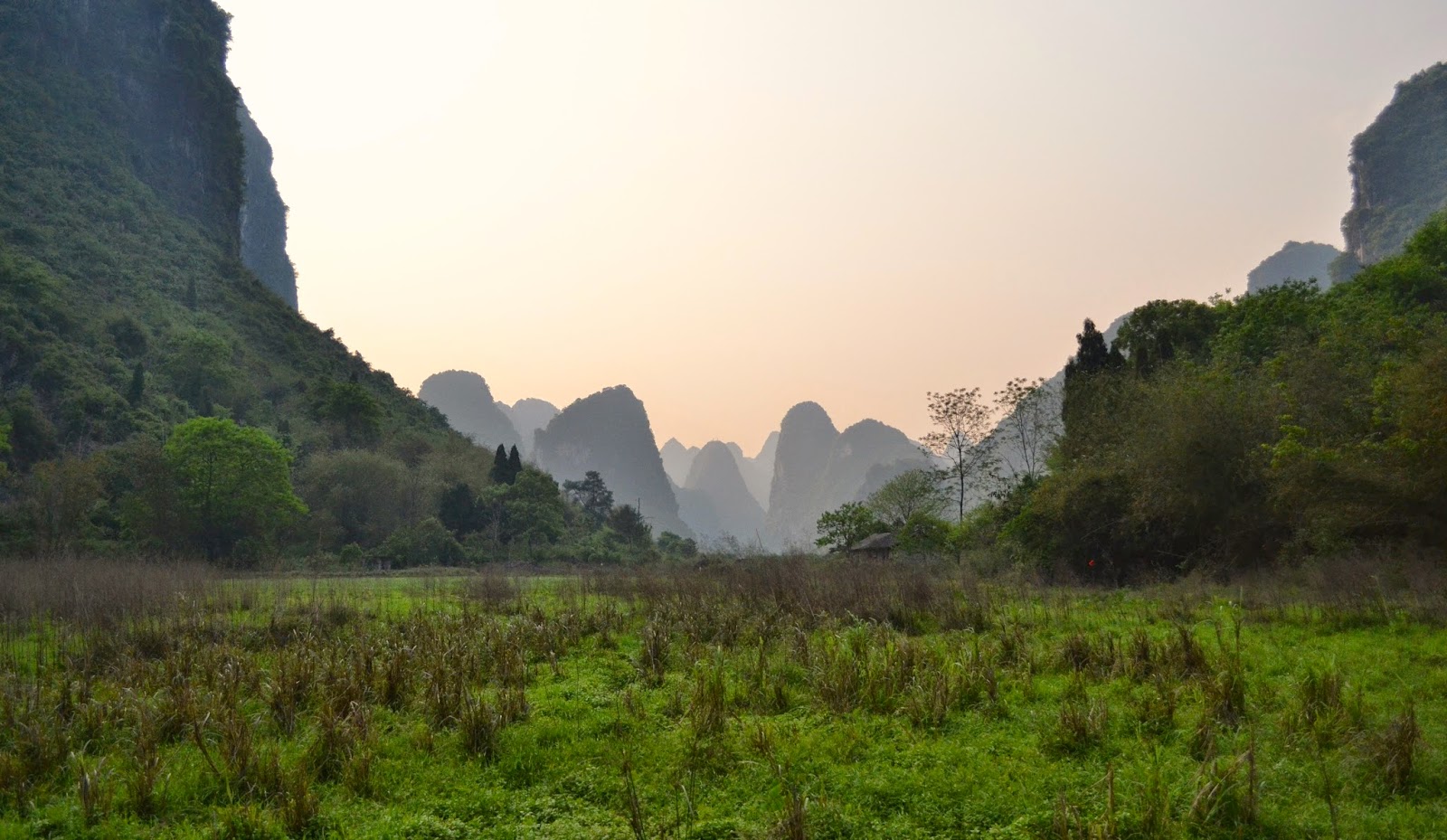 A Field In Yangshuo

2015's Tomb Sweeping Festival was a brief three-day weekend, but a chance to leave site, to see new things, and make new friends. For the holiday Libby, her Australian friend Abby, and I went to Yangshuo to climb. We set out on Friday night to climb through two tropically hot and humid days, then to leave on an overcast and temperate Monday. This was my third time in Yangshuo and each time the scenery has only become more majestic.

Even though this trip was significantly short in duration, I must say I learned more about the climbing community in these two days than I have during my whole year and a half climbing. At Climber's Inn we spoke with and traded ideas and info with climbers from all over the world. At the crags, we, being experienced, but not nearly experts observed and took note as far better climbers instructed, aided, and climbed. Prior to this trip I had only climbed next to and spoken to climbers who were not my friends one time, a year ago, before I really understood what I was doing. Yangshuo is likely the second biggest climbing destination is Asia, following a site in Thailand, and truly an international zone. 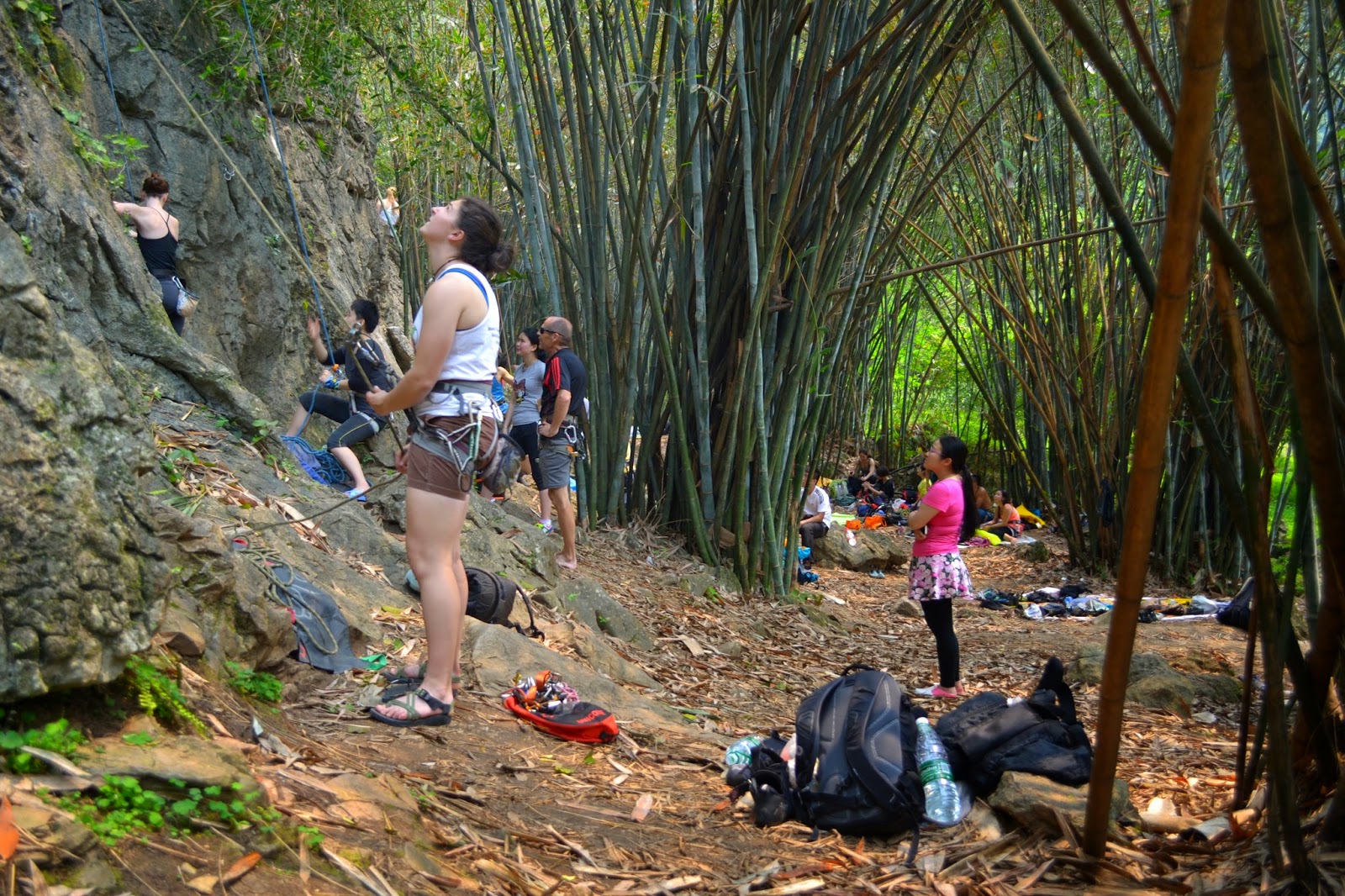 Yangshuo is the third most visited tourist destination in mainland China, and with the recent explosion of sport climbing all over the world (it is currently the fastest growing sports industry), I would not be surprised if Yangshuo became the most climbed place in Asia in the next decade, partially because China is projected to be the most traveled country by 2020 (but mostly traveled by its own citizens). At the crag in the picture above I spoke with two 1st-year college students from Hong Kong, and they were telling me for a mere 200 kuai (30USD) you could spend the whole day being bused around Yangshuo, with ropes in place when you get to the crags, guides to help you with route beta (info), gear that fits and works properly, and provisions all included. This is a great deal if you are not a 'climber.' In the picture above there are foreign and Chinese led climbing tour groups. Even though they do not yet clog the crags, I fear the climbing community will be pushed out of the more popular crags in the coming years, perhaps not by business, but by a withering desire. It is fortunate that there are still many crags to be developed in Yangshuo. 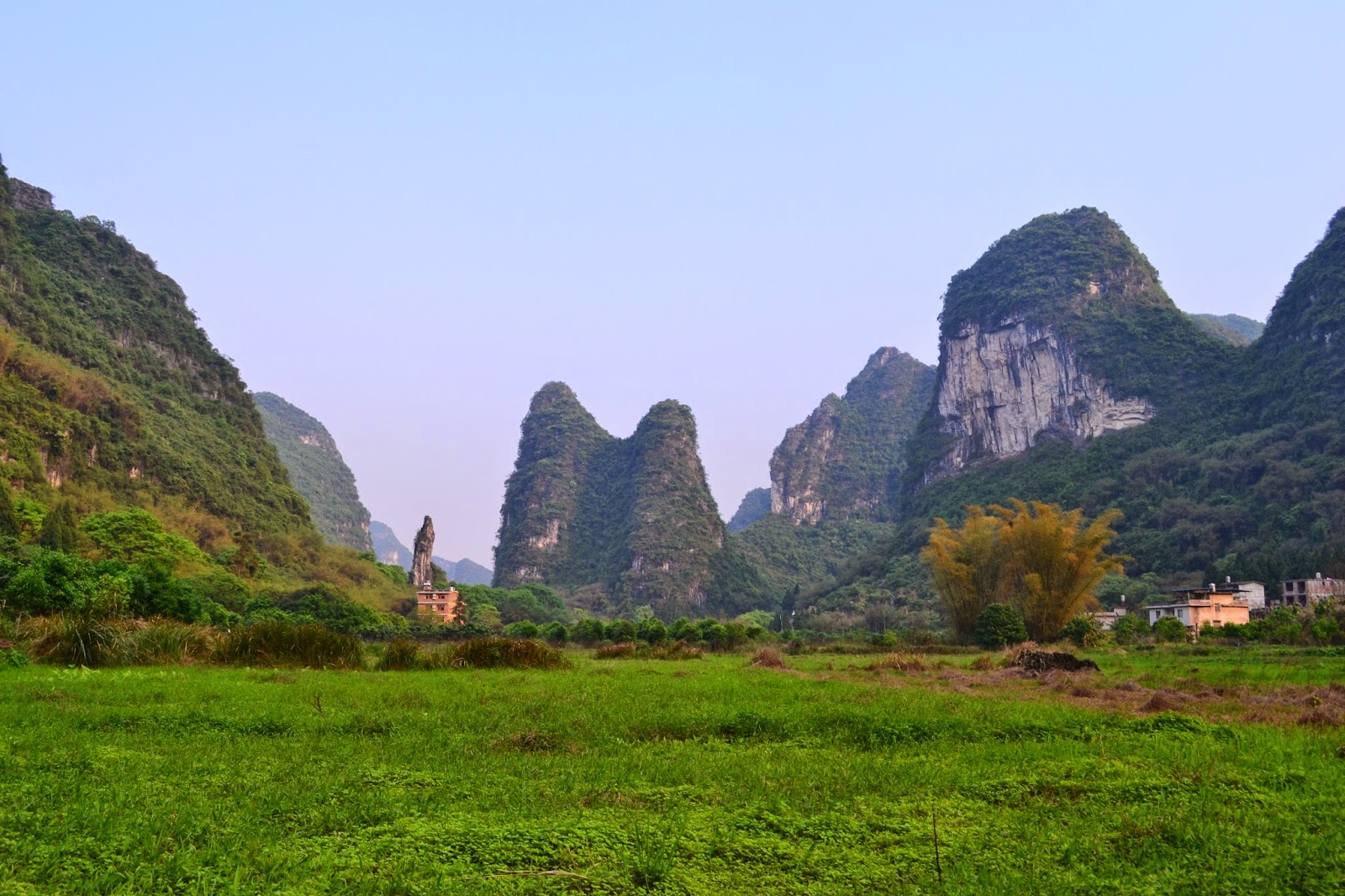 Per day, this was the most expensive trip I have taken to Yangshuo. Each time around the cost of food and transportation rose, not steeply, but enough to make another trip questionable, especially on a PC volunteers' budget. One thing that has not changed is the landscape. Each time I go I am thrilled and pacified by the natural majesty of the Karst mountains and lush verdure that roll together against the azure. 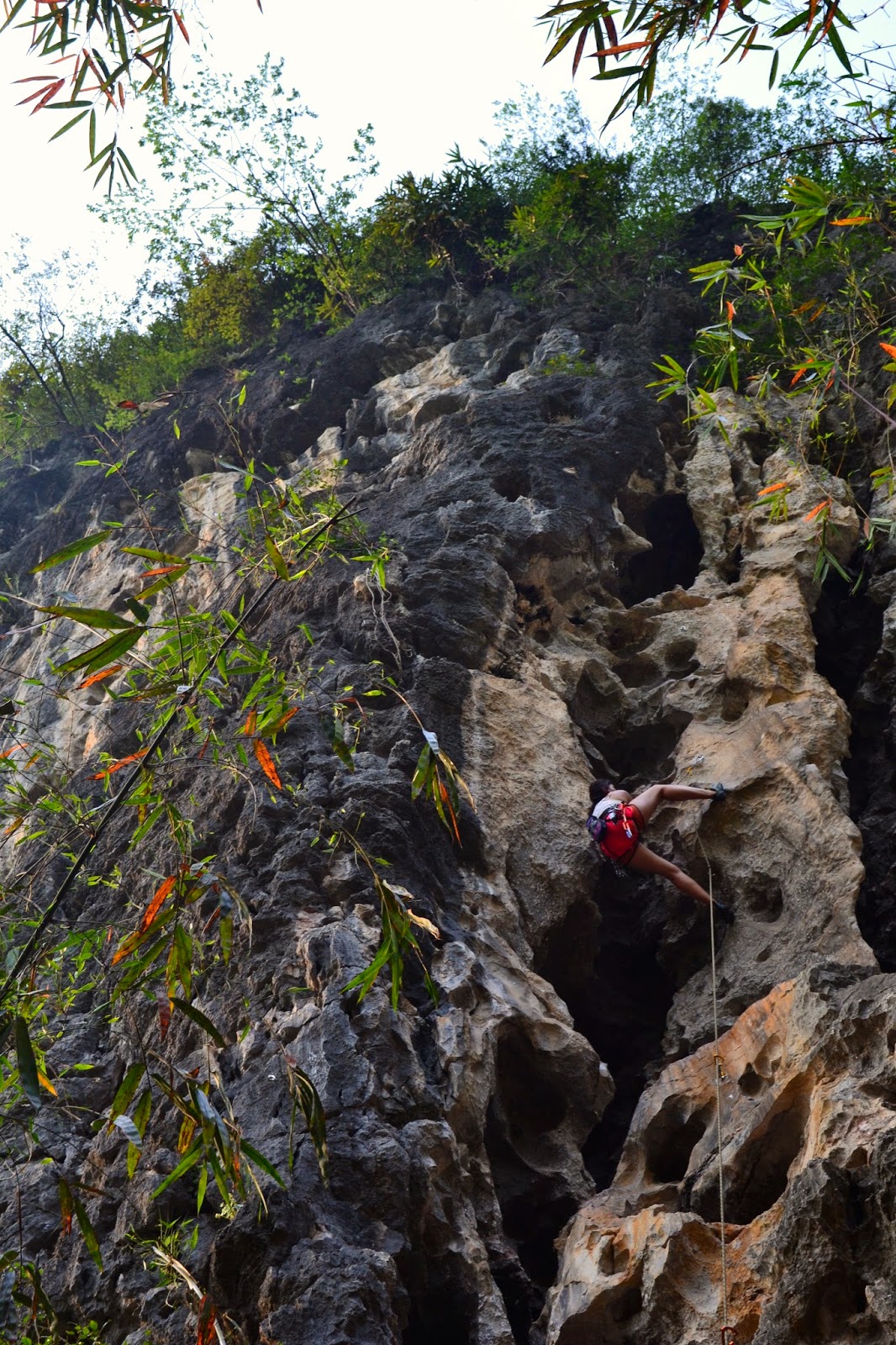 
We spent our first day climbing in the shade of the bamboo forest at Swiss Cheese Crag. At the crag there is a left and right section. We started on the right where all the tour groups set up, and then moved to the left side for quiet and new routes. On the left face the routes are obviously more difficult. I suspect the left face of Swiss Cheese will stay clear of tour groups for many years. After an hour or so of fumbling up an extremely difficult route we couldn't finish, the better climbers started coming over. Really, many of them were amazing. We pulled a couple aphorisms from them: 1) 'Two small steps are always better than one big step' and 2), 'When grabbing a hold, imagine where your body should be placed to make the best use of the hold'. 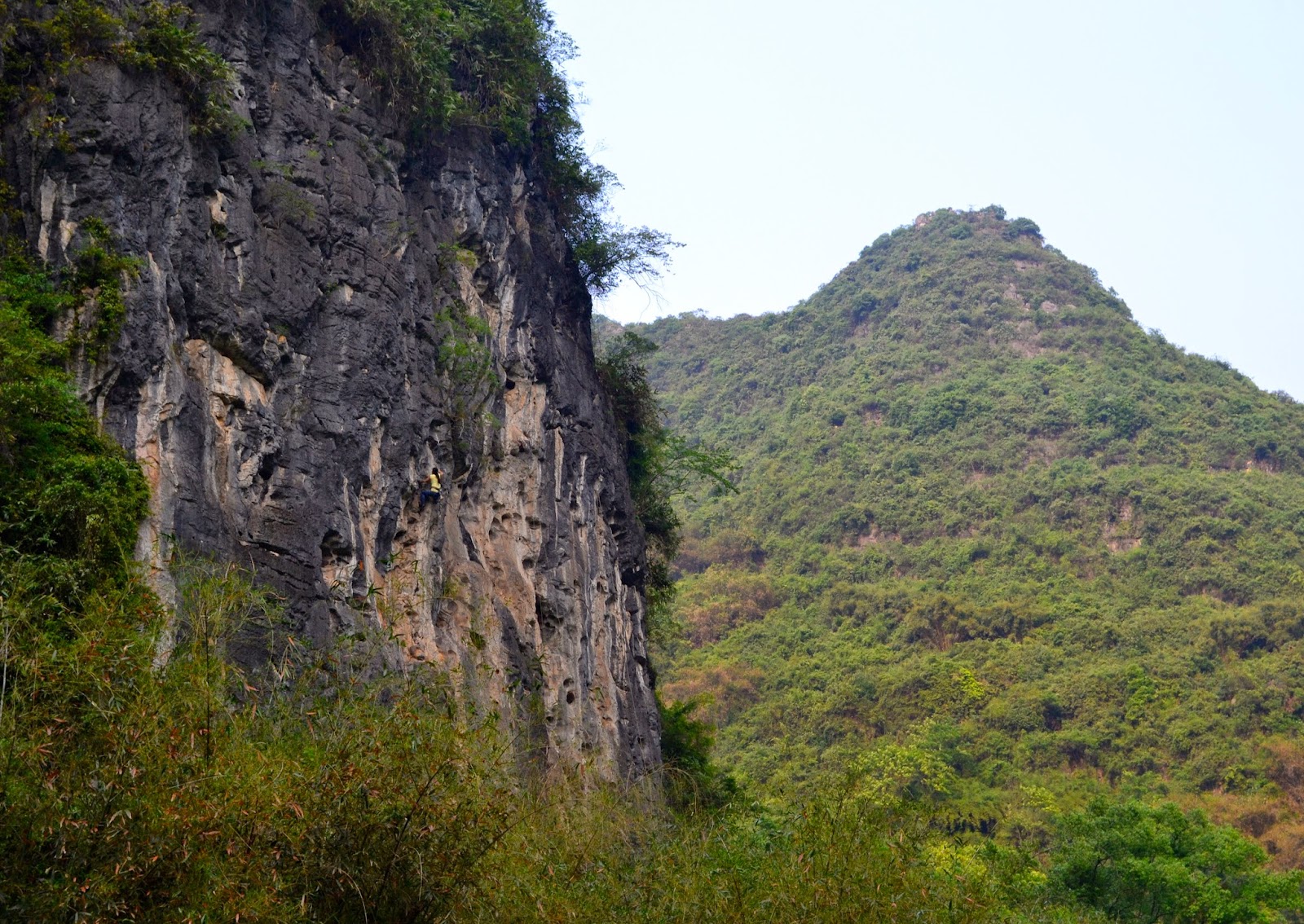 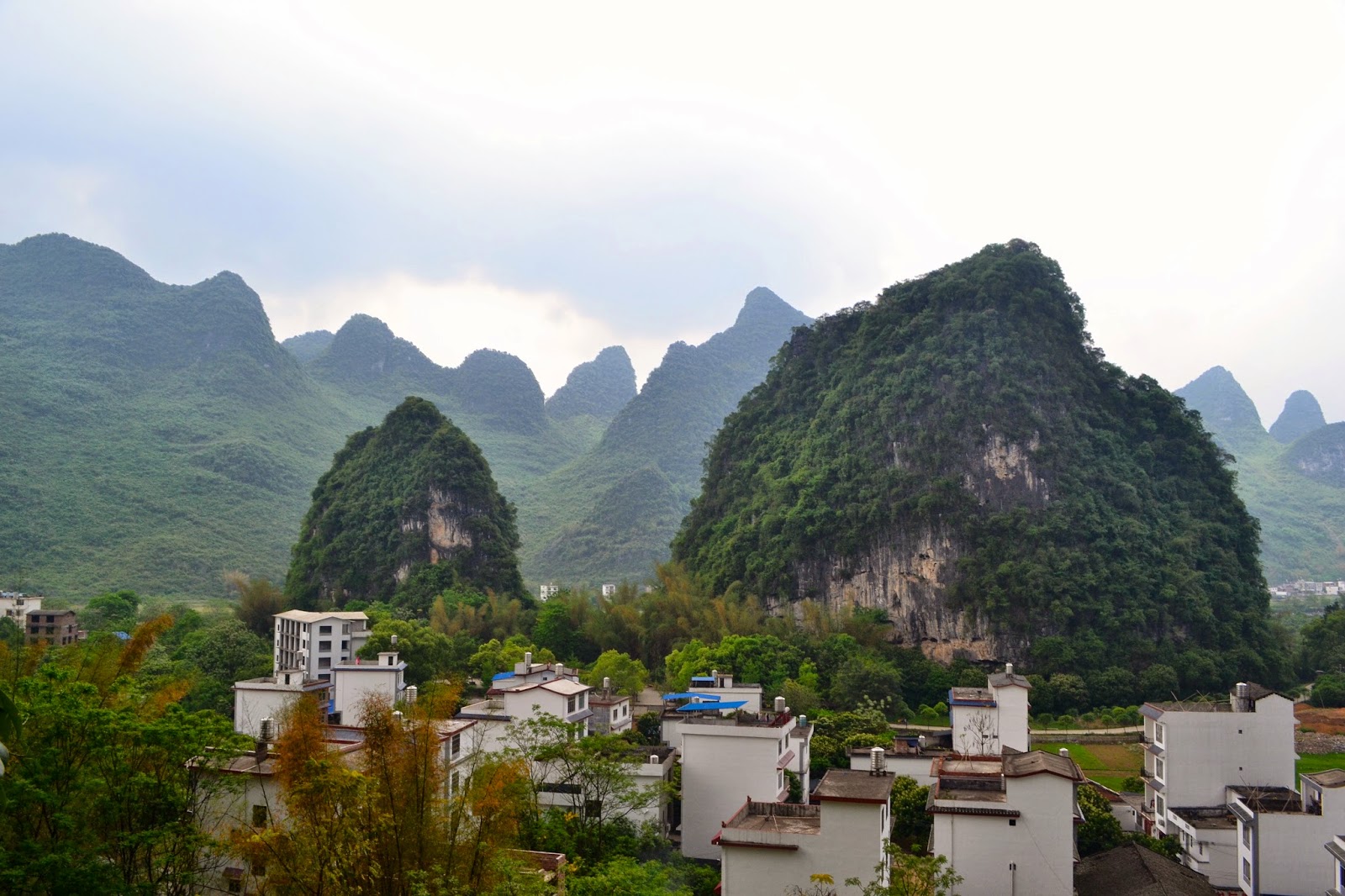 
On the second day of climbing we went to Baby Frog Buttress. As soon as we arrived on our bikes we were bombarded by mosquitos. They were not quite as vicious as last year, but I did run down to the village to buy a green colored and mentholated mosquito spray. As were were told by the boss lady at Lily at Climber's Inn, around 1pm the crag gets extremely hot, and in the humidity your energy saps in minutes, but to my amazement we held strong and climbed until we left. 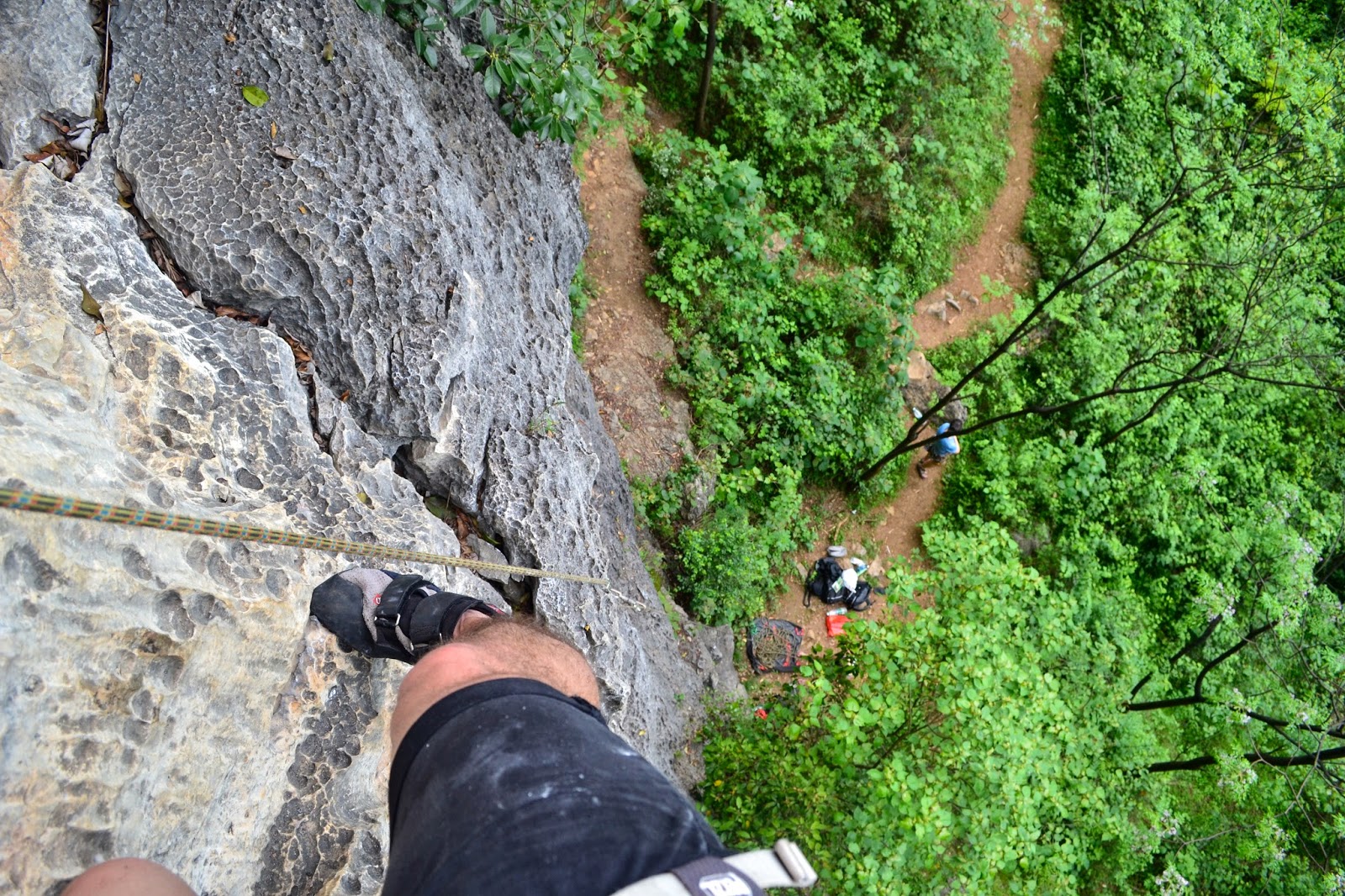 When I was climbing the route pictured above, in one spot, I jammed four fingers into a left pocket a foot above my head. About a second after my fingers were fixed, what felt like leaves and dirt started falling in between my fingers. Seeing a little tree on a ledge a couple feet above my hand I thought, 'Hmm, that would make sense why there is dirt in this hold. . . but after it being climbed so many times in Yangshuo?. . . unlikely, something is wrong.' So I wriggled my fingers at the dirt and leaves to have them slide out past my fingers, but the dirt and leaves wriggled back rapidly. I pulled my hand out of the pocket as quickly as I could. A huntsman spider the SIZE OF MY HAND sat on the rim of the pocket fuming. 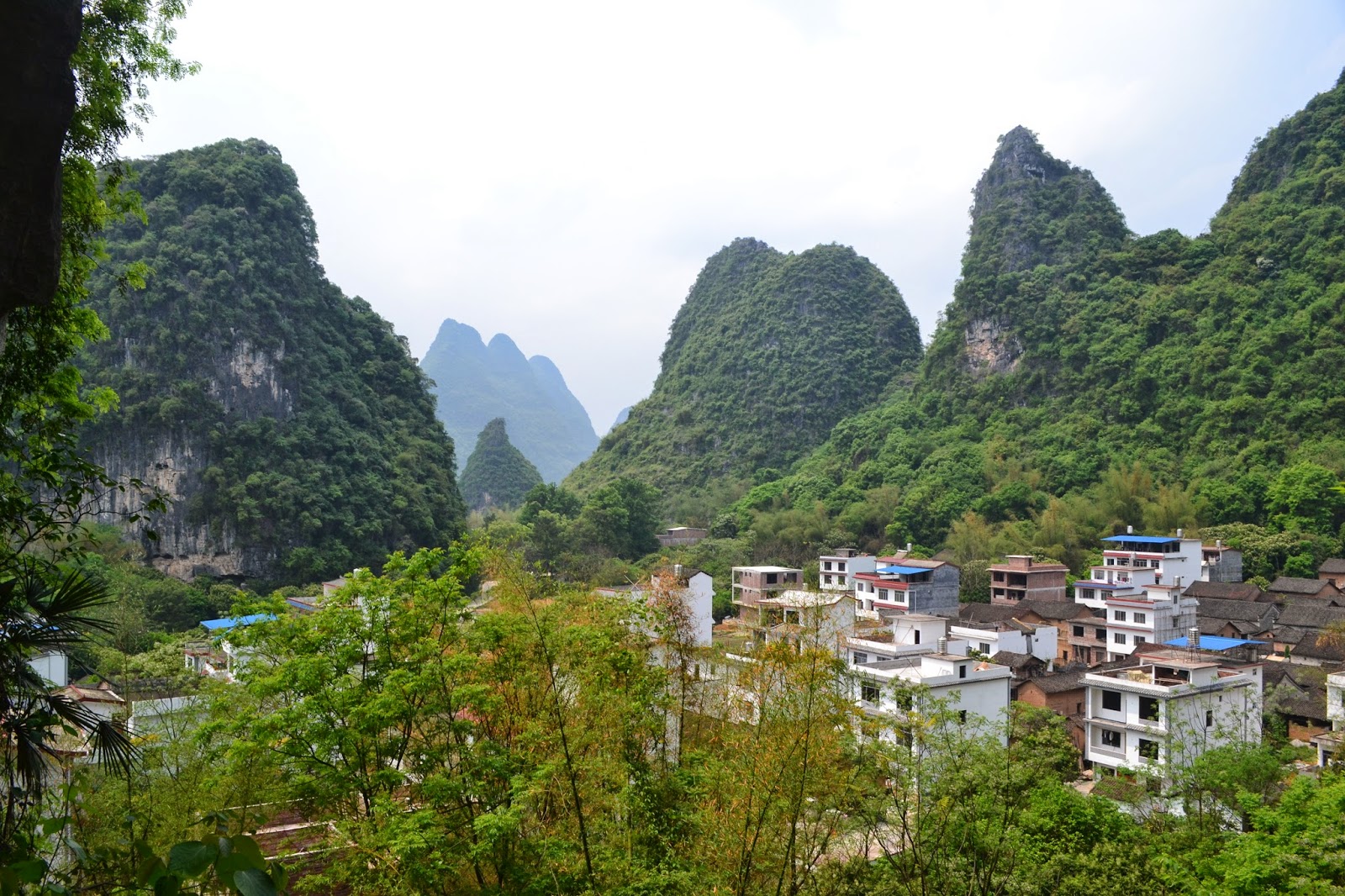 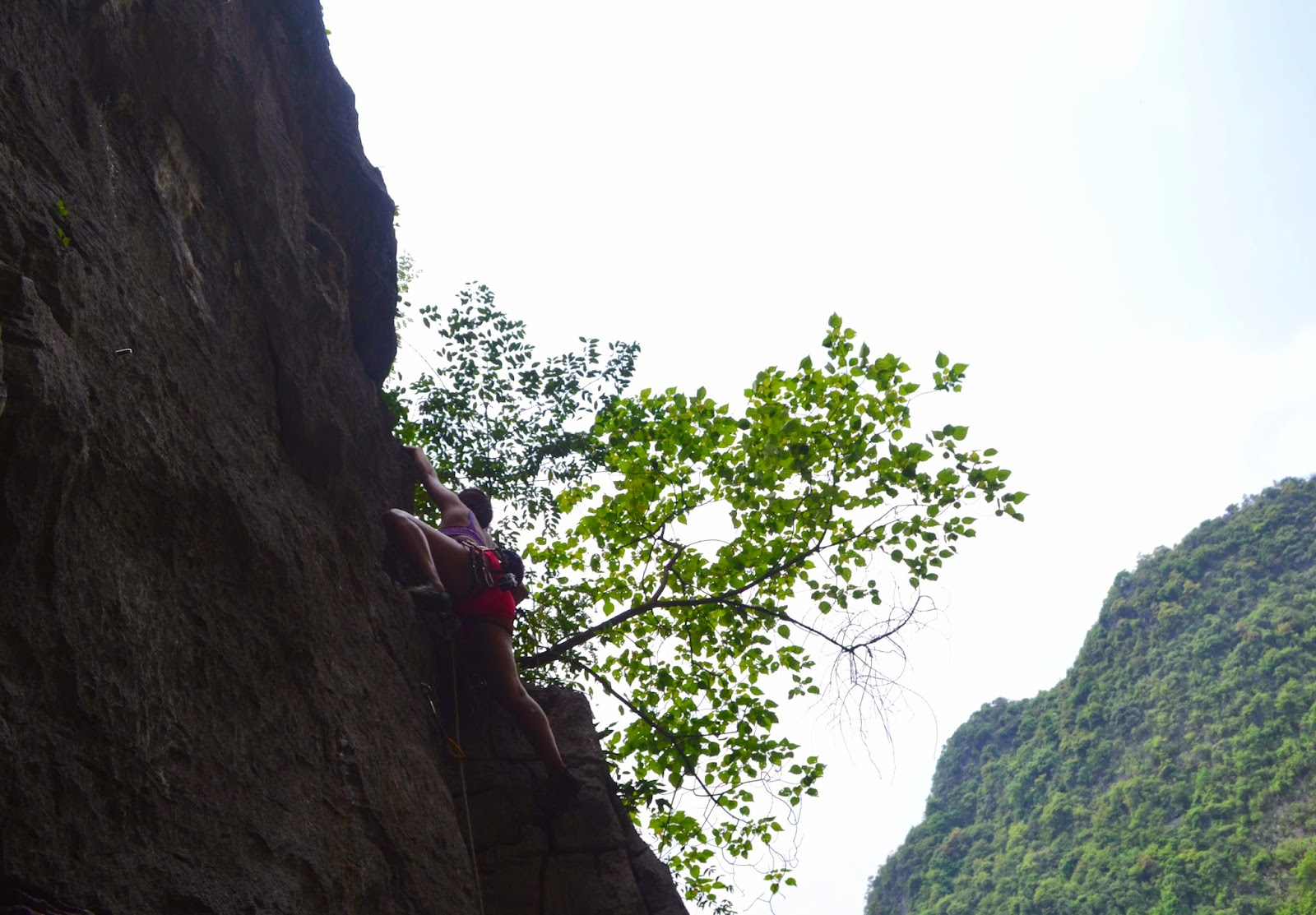 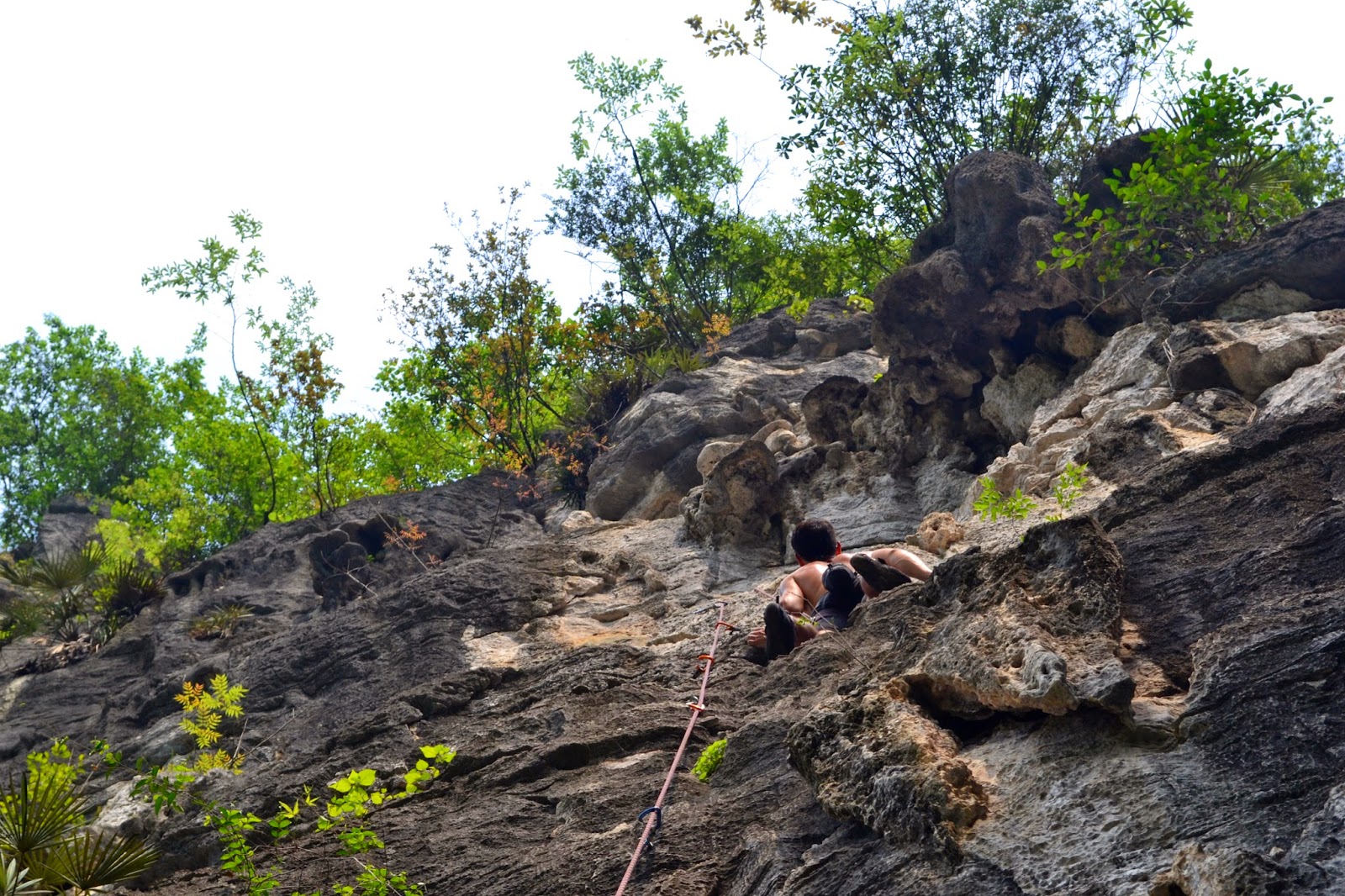 Me trying to finish a long lead route 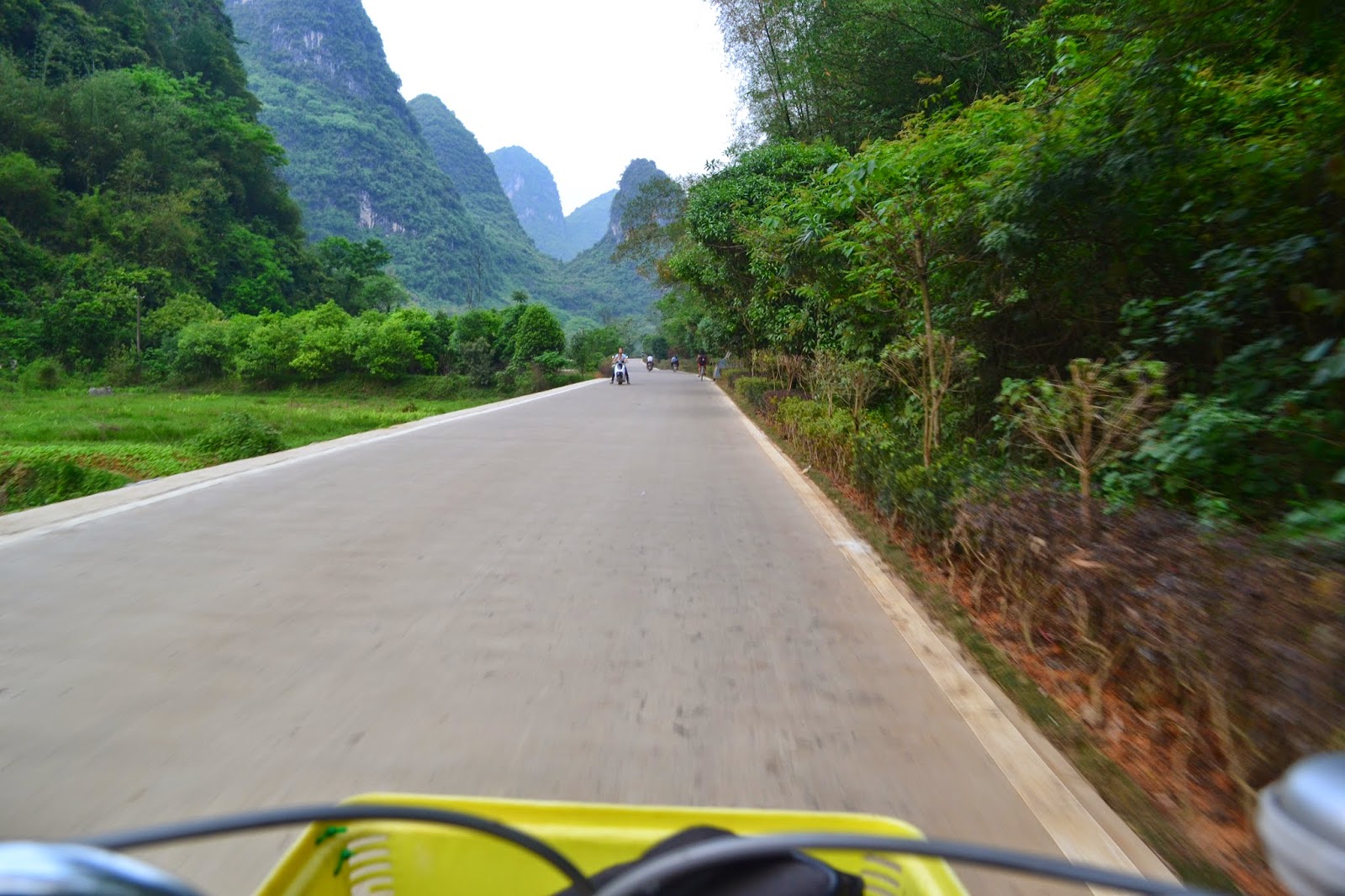 Biking back from Frog Buttress


Biking in Yangshuo is one of my favorite things to do in China. Even during the high season for tourism, when the roads are packed, you can still ride out to remote areas of the countryside for solitude and scenery. The Karst-scapes are incomparably majestic. 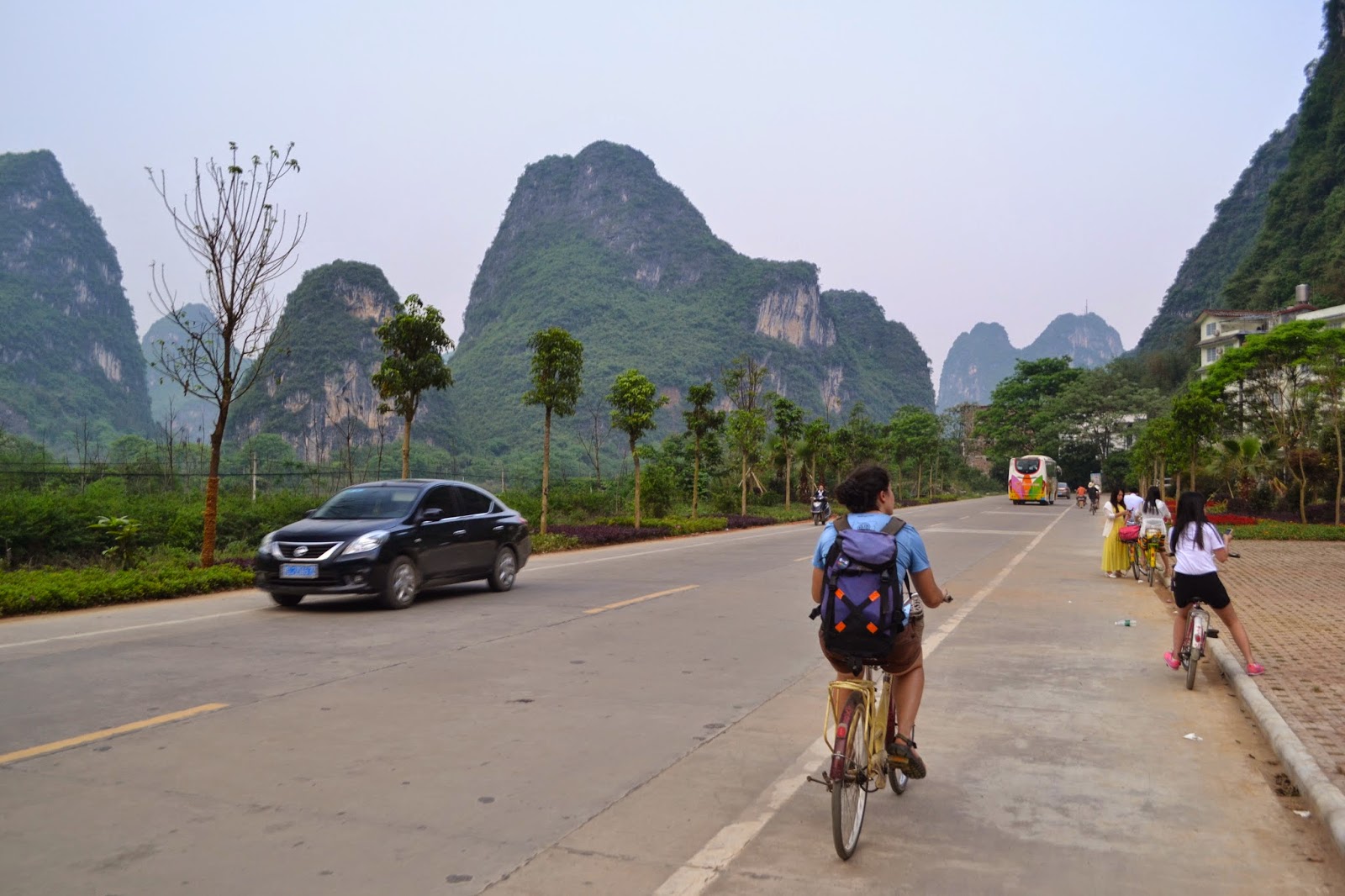 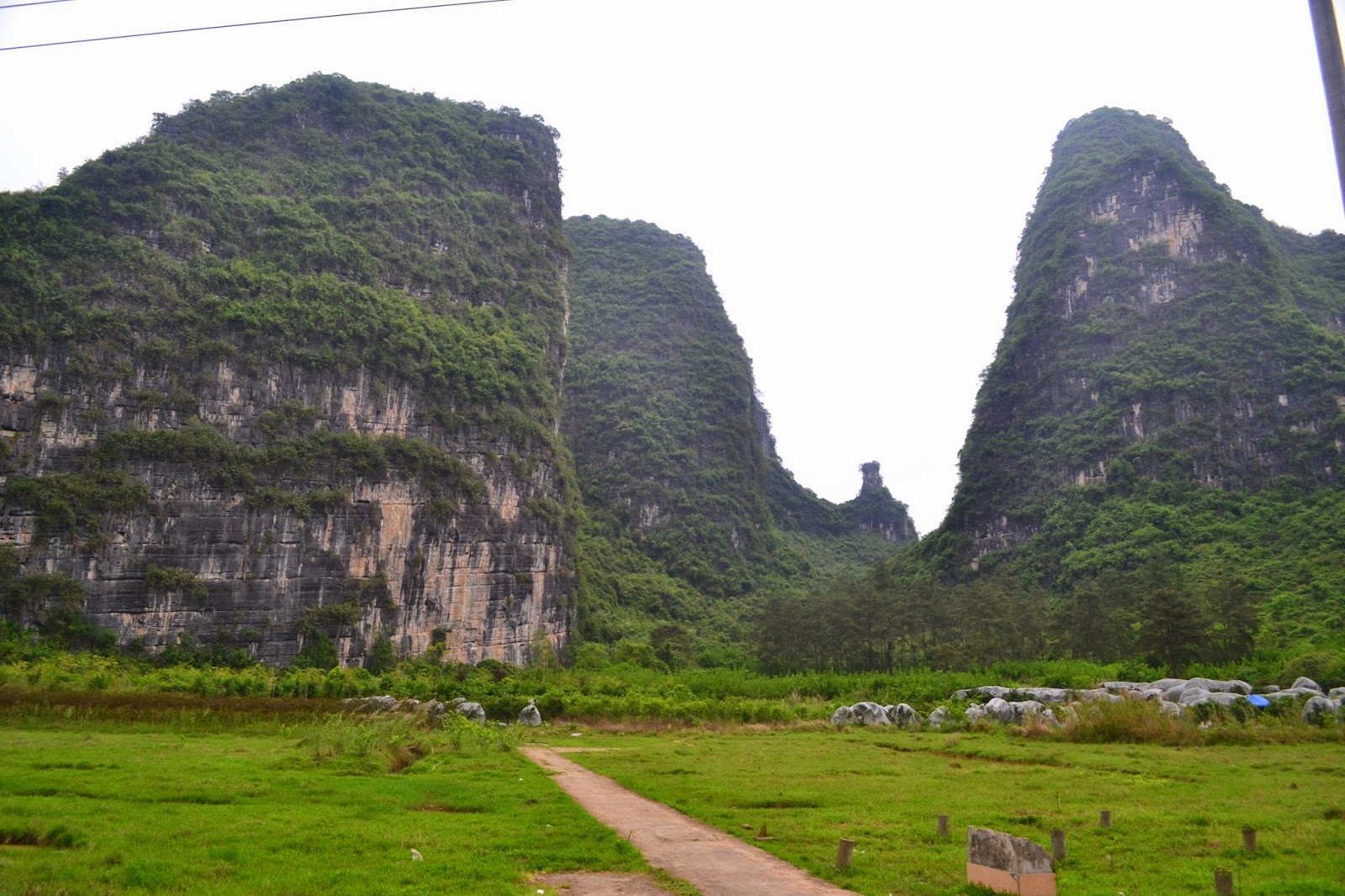 
I can't remember who, but Libby or Abby came up with the brilliant idea of waking up at 5:30am to climb before we would leave for our flight at 8:00am on Monday. Sunday night we arranged the drivers and our gear. A climber in our hostel overheard our plans and he commented, 'Yeah. . . You have a serious addiction.' Come 5:30 we were out in the darkness. When we got to Wine Bottle it was still pitch black. As we set up our gear the darkness slowly lifted from the valley. We only got one route in before we had to leave, but it was well worth it. 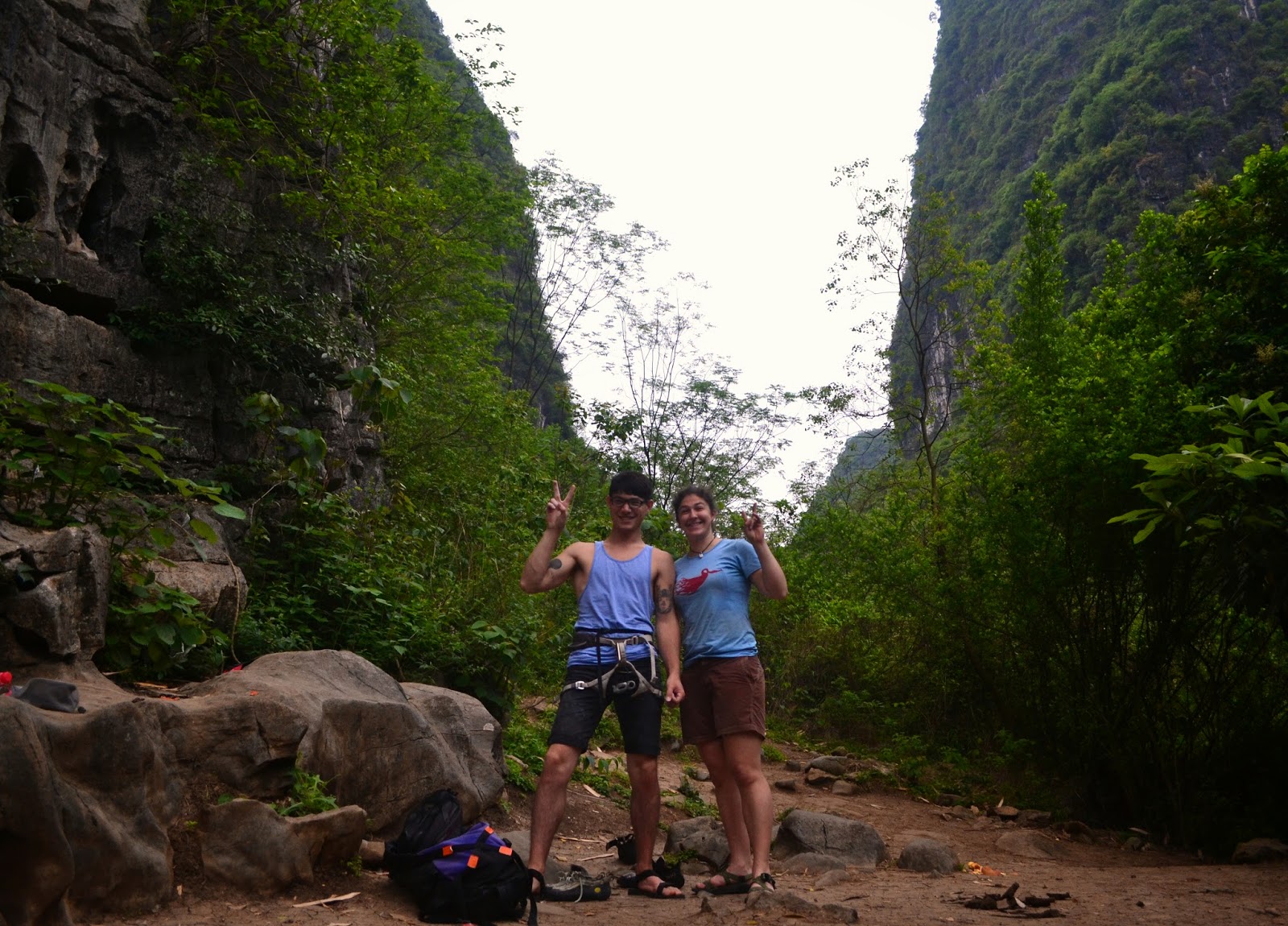 Libby and I at Wine Bottle Crag

As always I had a great time climbing and biking in Yangshuo. Not only did I learn a lot about the climbing community and industry this trip, but I also made new friends. I recognize have been fortunate to spend so much time with such intelligent and talented people in the Peace Corps, always learning new and highly specific things: Libby is a chemist by trade and Abby a mining engineer (both are clearly badasses). I hope to continue to have such great trips, in such beautiful places, with such amazing people. I couldn't imagine a better final semester for myself in the PC. 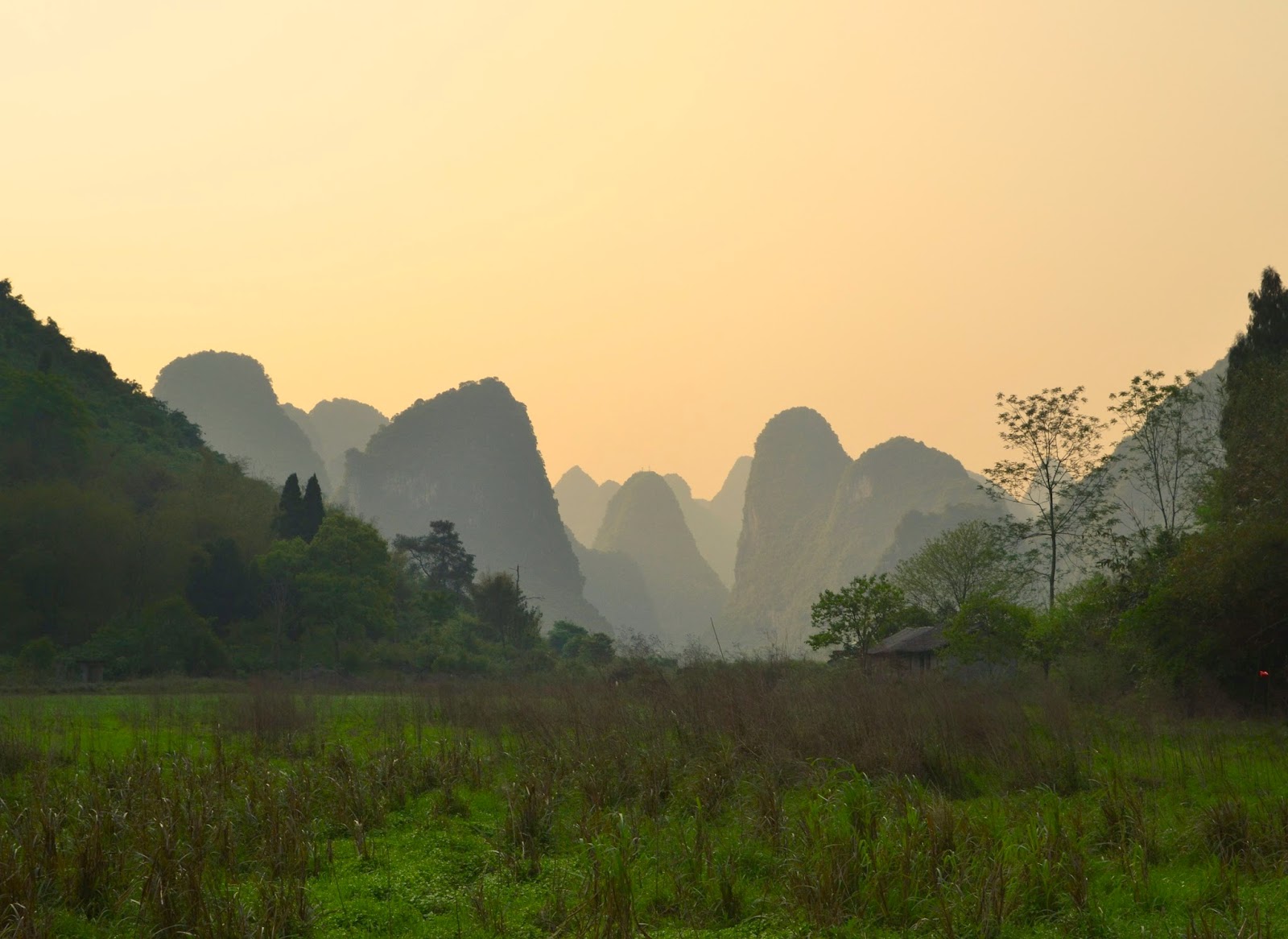