I wish the circumstances were different. Friday late in the afternoon I was told that I would be living alone for an undetermined amount of time. When my Host Family found out that our grandmother had fallen deathly ill they dropped everything immediately and left to be with her. Since I do not have a cell phone or land line I cannot contact them. We are both sitting in the dark. Wherever they are, all my hopes are with them.

What can I do for them when they return home? What would make my Host Mother happy?

Not knowing what is considered -- a socially acceptable reaction, I asked one of my PC instructors if she thought buying gifts was a good idea. Breaking from her usual quaint elegance, nearly the dip of a curtsey demure, she backhanded me with a flat "NO." Unless her answer was stock and dictated by my low income and/or position, to which I hope it was not, the logic is commonsensical: gifts do not cure grieving. It is amazing how distracted and ignorant you can become when trying to help remedy the anguish of an august friend.

Thinking, I remembered how I made my host mother cry with laughter when I announced, with my chest inflated, that I could make 'wontons.' My 3rd generation americanized pronunciation of the Cantonese word, wonton, turned her intensity knob from a natural 7 to a 10. In Mandarin, wonton, is pronounced, hundun. In fact, many Chinese ingredients and foods available in the U.S. have Cantonese names, such as bok choy. If Mandarin is the dominant or official language in China, why then, do we have so many Cantonese words in American cuisine? By 1890, a little over 100,000 Chinese people had immigrated to the U.S., most of which came from Canton Province (now Guangdong), where Cantonese was/is dominant. My Chinese family is one of those immigrant families, hailing from Taishan county, like many old Chinese Bostonians. Although some people may contest, I contribute the popularity of wok style cooking in the U.S. to early Cantonese immigration, in that the wok is a Cantonese word and invention. After I displayed my, might I say, exceptional jiaozi (dumpling) folding technique, in her whiplike shrill voice, my Host Mother kept repeating, "Guangdong! Guangdong! Guangdong!," with spurts of uncontrollable laughter in between.

You have heard, "The way to a man's heart is through his stomach," well, I plan on applying this technique, in a less crude sense. When my Host Mother returns I plan on cheering her up though my cooking. I will construct my own dish with all fresh Sichuan ingredients.

I have been cooking for myself since I can remember. Dabbling in and experimenting with many cuisines. But as you may have heard, Sichuan cuisine is a whole different ballpark, a different narrative of flavors. Since I am paid something like 6.10USD a day my dish will not be fancy, but basic and hopefully tasty. Without a recipe I will attempt to make a vegetarian la mien (spicy noodles). 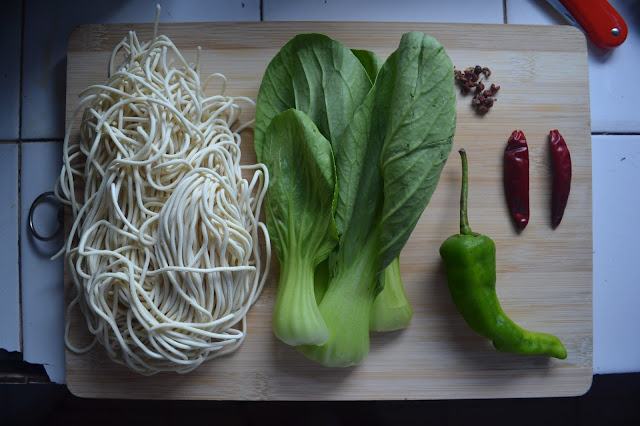 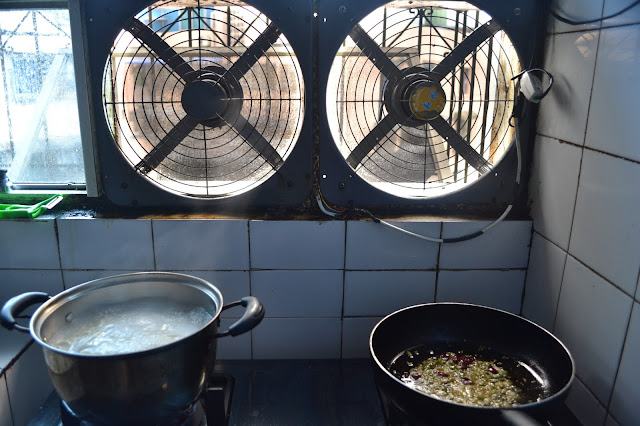 2. Cook
- Boil Bok Choy Lookin' Stuff in pot on the left to eviscerate all bad things that cause your stomach to churn.
- Boil Noodle in pot on the left.
- Put everything else in the pan on the right.
- Mix contents from pots carefully. 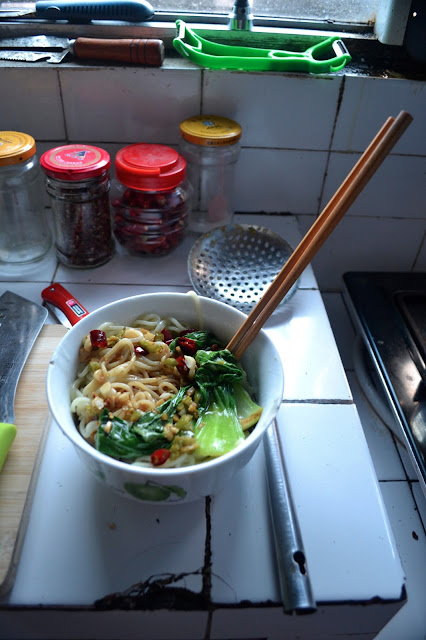 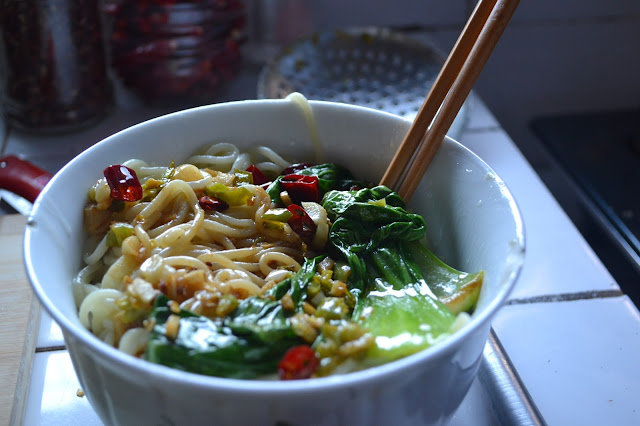 It is not as spicy as I'd like it to be but that can be fixed. Adding put the costs of ingredients it comes out to about 3 kuai (50 cents USD). Don't let the pictures deceive you, that bowl is very big. This is a full meal. In about a month I plan on eating a dish like this every night.

I don't think my Host Mother will care much for my food but I hope that she will be able to laugh about it.

Let's Catch Up In China

Let's catch up. I am unwilling to give up the initial presence, rather than purpose, of this blog. Since my last harangue much has happened in my life. I graduated from Lake Forest College with a double major in Asian Studies and Philosophy. I spent two weeks between Boston, Phili, and New York, everyday filled with  a cesspool of hot, uneasy class and gnarl, like a wrinkled dress shirt and worn Sperry's.

My brave girlfriend and her fancy job look down at Rockefeller Center. I marvel at this image confidently.  If I were not where I am now I would be in New York City, for sure. Either in Brooklyn or Harlem. Their auric urban aromas cause one to wince yet somehow dually enchant. But this is a conversation for another day.

Funny enough, I wrote a one hundred thirty sum page senior thesis on, "Thucydides' Trap: The Possibility of War between the United States and China," and the Peace Corps sent me to China to serve! I achieved my Plan A right out of undergrad. Although I can't speak about the quality of my job yet since I am still in training, I can honestly say the volunteers of China 19 are some of the most good natured and intelligent people I have ever met in my life. Every 19 is in inspiration.

Right now I am siting in my room in Chengdu, China. My dress clothes are hanging on an ancient, unsteady bamboo stick outside my window. I fear the wind will carry all of my cloths away.  My host father, Mr. Xiao and I built a desk for my room. One of my desk's legs was too small so we had to shake down the pirate desk salesman for a new one. There are pencil scrawled abysses all over my walls. Some may think my room looks filthy but I feel as if I were living in a Cy Twombly painting. My bed is like a Hostess cupcake, it fills most of the package. . . 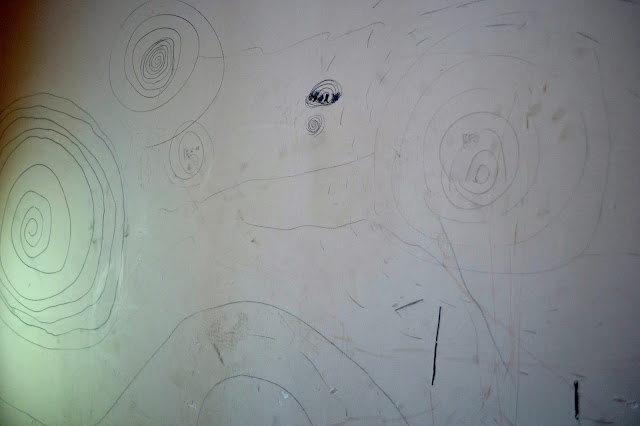 The Twombly in my room.

To me, most of what I have written above is uninteresting. I find stories of others, stories of things, and movements of the world interesting. I will continue to post about people and books, but most of all I want to show you a side of China that is ungarbled by media and politics. To start, here: 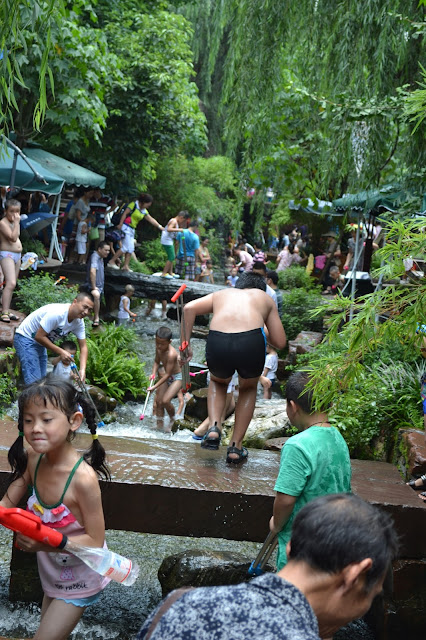 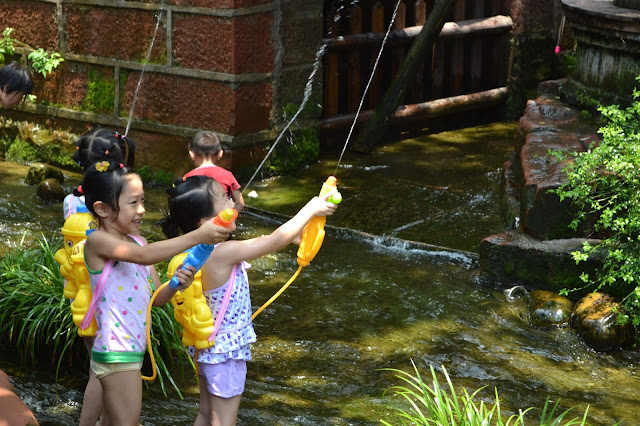 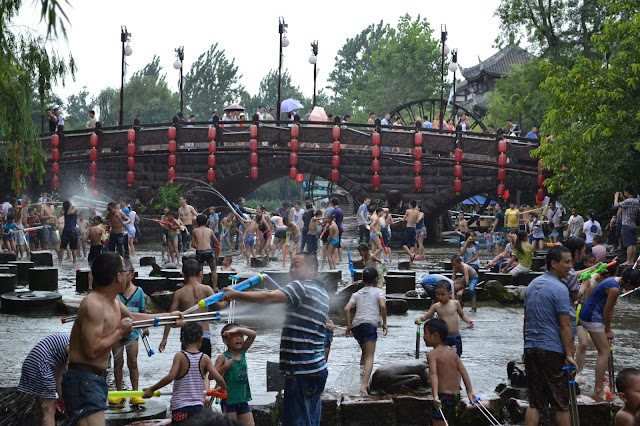 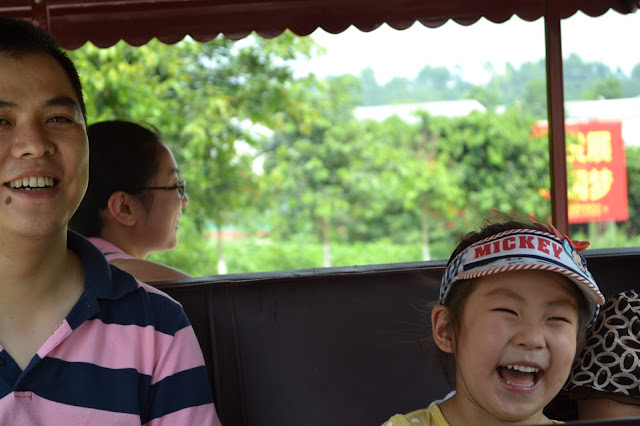 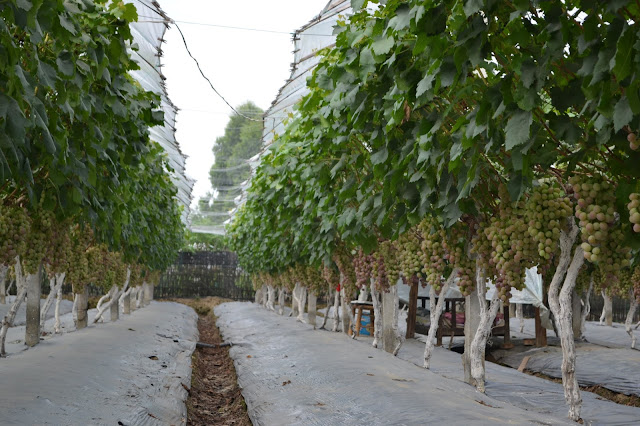 A vineyard on the outskirts of Chengdu

Posted by Unknown at 2:47 AM No comments: